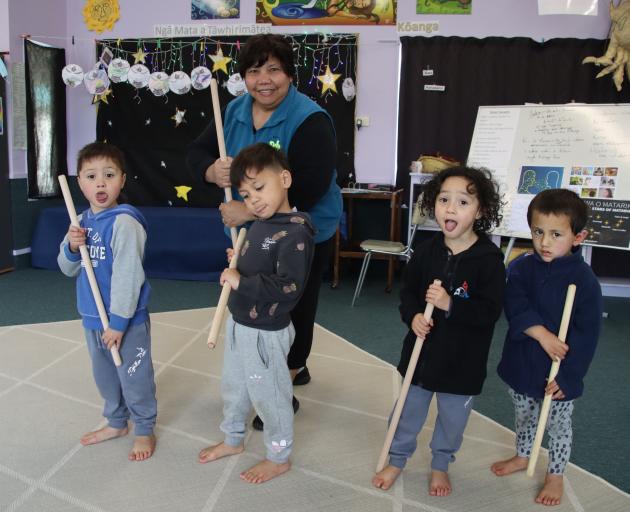 One of the kaiako (teachers) at Mataura’s Kia Ngawari kohanga reo, Mrs Rarere has been in New Zealand since 1988.

She said she believed Maori should be the first language of the nation.

‘‘I encourage everyone to learn this unique and beautiful language.’’

Many languages were taught in schools.

‘‘This is the language of our home.’’

The example of her grandson was one good reason why te reo Maori should be taught in primary school, she said.

He went from using the language at kohanga to not speaking it once he went to school.

‘‘He refused to speak Maori to me because it’s not [spoken] at school.

Mrs Rarere grew up in the Phillipines and met her future husband, the late Jackson, when a friend suggested he write to her.

He came from Wairoa and was a member of the Rongomaiwahine iwi but he was working in Mataura.

Later he visited her in the Philippines and on his second visit in 1988 the couple married and returned to live in Wyndham.

‘‘I had no intention to marry a foreigner at all,’’ she said.

When it was time for the couple’s children to attend preschool, Mrs Rarere visited Te Puke o Waiarikiki kohanga in Wyndham.

The atmosphere in the kohanga appealed to her.

There were many similarities between Maori and Filipino culture, she said.

The kohanga had become like a ‘‘second home’’ to her.

She started working as a mother help but then a desire to learn more te reo started to grow.

Her husband was a fluent speaker but he did not use the language.

He also did not help her learn but had the attitude ‘‘you watch and listen and you will learn’’.

‘‘She took me under her wing.

‘‘She is a big influence in my learning and te reo.’’

Under Mrs Newman’s guidance Mrs Rarere eventually qualified as a kohanga kaiako in 2007.

There were some obstacles to her becoming a kaiako.

‘‘It’s a long and challenging journey for me to complete because there’s negativity about me a Filipino running kohanga reo.’’

She used the opposition to motivate herself to prove herself.

It was her ‘‘passion for the language and the culture and also to pass on the knowledge to her children and my grandchildren’’ that inspired her to continue to grow her te reo skills.