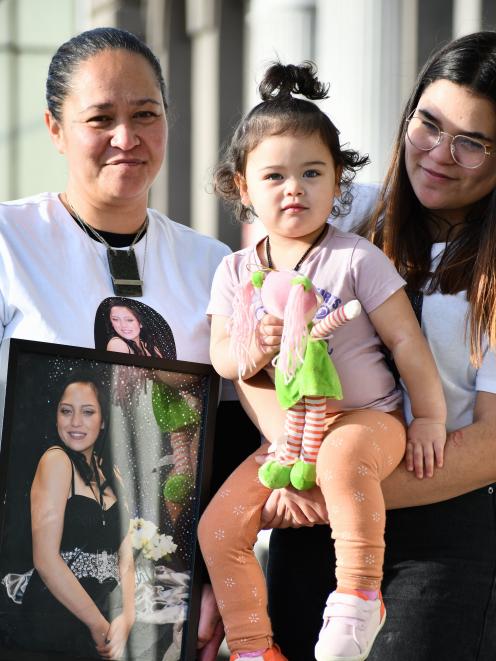 The family of murdered Invercargill woman Azalia Wilson (from left) Trinette Wilton (mother) and Crystal Wilton (sister), holding Ms Wilson’s daughter Kiara (1), have set up a business to help victims of domestic violence. PHOTO: LAURA SMITH
When Trinette and Crystal Wilton’s daughter and sister was murdered, they were angry she had been taken from them.

But the support of their loved ones and the fond memories of Azalia Wilson made them want to transform that anger into action.

Ms Wilson was brutally murdered in November 2019, by her ex-partner Samuel Samson, with whom she had a daughter.

Last week, Samson was sentenced to life imprisonment with a minimum period of 17 years after being found guilty by a jury of murdering Ms Wilson.

Her family are now helping others who suffer from domestic violence.

Crystal Wilton, Ms Wilson’s sister, said she hoped no other families would go through the "nightmare" they had been through.

"We don’t want another Azalia case.

"All we’ve wanted to do, since the day Azalia passed away, is to help people and to not have this happen to anybody else."

The family have set up a business with all profits given to domestic violence charities.

The Azalia Apparel is an online retail store which sells clothing with messages raising awareness about the issue.

"We are creating pieces for a cause we feel deeply about.

"Those messages — like ‘know the signs’ and ‘stop the violence’ — became our mottos since day one," she said.

"We want to have messages which make people feel stronger," she said.

It had not been an easy process to get the business up and running.

Since the murder, the family have been involved in court trials and proceedings, which they described as "draining".

All their energy had been put into pursuing justice for Ms Wilson.

While her family knew Ms Wilson was in a troubled relationship, they did not want to push too hard, so as not to drive her away.

"I always told her that our home was safe," Trinette said.

Crystal said the murder of her sister had affected her in so many ways, including now being too frightened to start a relationship.

"This whole thing made me more aware of what people are capable of. I’m almost scared of everything."

Being open about their struggles meant they constantly relived the memories and pain of the crime.

However, both believed it was worthwhile if it meant they could help someone else.

"I just don’t want anyone to ever have to feel the way I feel," Crystal said.

Trinette said many people had reached out to say they had left violent relationships as a result of seeing what happened to her daughter.

"What happened to us shouldn’t happen to anyone."

They also wanted to speak to young women and at schools about the problem.

Anyone who had ideas or important messages to share with them should get in touch, Trinette said.

"I couldn’t save her, but hopefully we can save someone else."