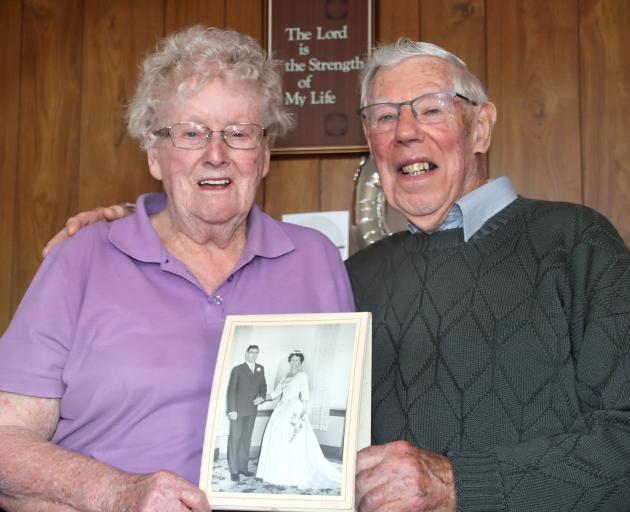 Gore residents June and Roy McKenzie celebrate their 60th wedding anniversary yesterday. Mrs McKenzie says her prayers were answered after meeting Mr McKenzie, a Presbyterian minister, at an Easter youth meeting. PHOTO: SANDY EGGLESTON
When June Chamberlain first saw her future husband she did not like the idea of being a minister’s wife.

However, that is exactly what happened when she married Presbyterian minister Roy McKenzie about a year later.

The couple celebrated 60 years of marriage in Gore yesterday.

Mrs McKenzie said before she met Mr McKenzie she saw him in the distance, leading an Easter youth meeting.

She sensed a voice telling her she was looking at her future husband.

"When the Lord said ‘that’s your life partner’, I said ‘oh Lord no, not him’ but the Lord knew," Mrs McKenzie said.

A couple of months later they were formally introduced.

"From there on there was a mutual attraction," Mr McKenzie said.

Despite her earlier misgivings, Mrs McKenzie knew her prayers had been answered.

"I prayed for my life partner and I knew straight away Roy was the one," Mrs McKenzie said.

Mr McKenzie was part way through pastoral training at Knox Theological Hall and Mrs McKenzie worked as a Plunket nurse in Dunedin.

They were engaged at the stroke of midnight, New Year’s Eve, in a small rural church near Blenheim, where Mr McKenzie was stationed while on holiday from Knox.

Their shared faith had been an important part of their relationship.

"We knew the Lord had brought us together and we knew we loved one another dearly," she said.

Mr McKenzie served for about 30 years leading churches in places including Otautau, Wyndham and Dunedin and he could not have done it without Mrs McKenzie, he said.

"June has been an admirable pastor’s wife and she has always shown an interest in other people," Mr McKenzie said.

The pair were very good friends.

"We get on very well together," Mrs McKenzie said.

Each person in the relationship needed to be honest about their own weaknesses and willing to grow as a person.

"You learn and mature as time and experiences go on," Mr McKenzie said.

The couple had three sons, seven grandchildren and one great grandchild.