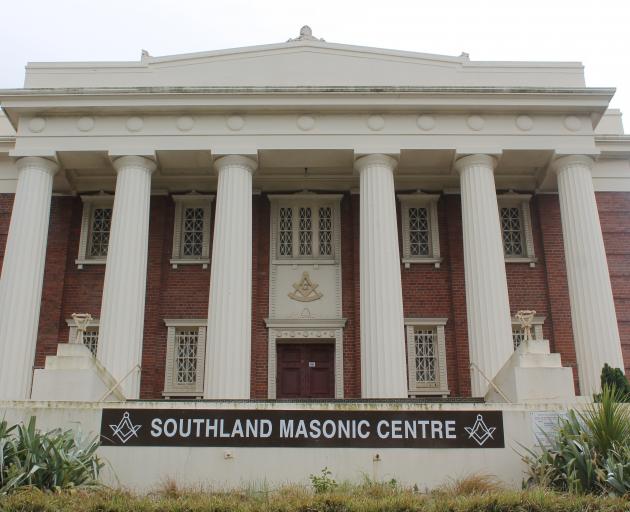 The Southland Masonic Centre on Forth St, Invercargill. PHOTO: SHARON REECE
The decision to sell one of Invercargill's category 1 heritage buildings after more than 90 years "wasn't an easy one to make".

The Southland Masonic Centre was listed as "to be sold by tender" through Southland Real Estate last week after being in the hands of the Invercargill Masons since it opened in 1926.

The Forth St complex is hired out to the public for functions and is the base for the Southern Farmers Market on Sunday mornings.

Freemasons South Island divisional grand master Rob Angelo said while the decision was difficult, the Invercargill branch had to "look to the future".

A lot of money had been put into maintaining the building, but the new generation of Masons were "now looking at things slightly differently", he said.

Changes in building regulations and a decline in members in Southland contributed to the decision, he said.

"While our members there are enjoying what they have, they're faced with some pretty big decisions."

Listing the building was "very exploratory" and the sale by tender meant the Masons were testing the market to understand how they would move forward, he said.

"They realise that they can do more for the community if they don't have the building," he said.

An assessment of the building provided to the Invercargill City Council in 2016 said the building was "an example of high quality classical Greek Revival design" and was "possibly the grandest lodge in NZ".

The property sitting "slap-bang in the middle of the CBD" made it a great site for inner-city offices, a high-end restaurant, or accommodation, he said.

"You could basically do whatever you liked," he said.

Heritage South chair Rachael Egerton said she hoped someone saw the potential of the "stunning" building.

The main focus of Heritage South was to promote a greater sense of value in heritage, and the sale would be on the radar of the trustees, she said.

"We'll be watching, hoping that someone who sees the value in its heritage features is going to pick it up and love it and make it even more accessible and used."

Tenders for the building close on March 1, when the Masons would have a better idea of their future plans, Mr Angelo said.