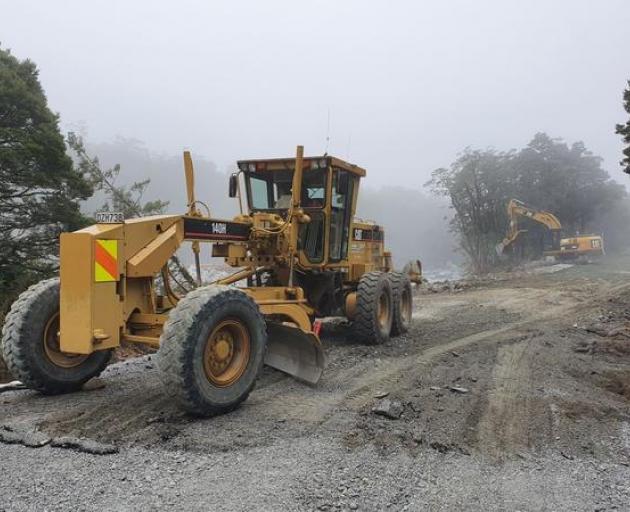 Work on temporary repairs for Milford Road underway earlier in February. Photo: NZTA
Crews are scouring Milford Road for damage, smoothing it out ahead of the first tourist convoys this morning.The only road into Milford Sound was extensively damaged when more than a metre of rain fell in less than three days at the beginning of the month.

Up to 60mm of rain is expected to fall this morning, but organisers are confident tourists will be cruising the fiord before lunchtime.

It has been a tough summer for tourist operators in Milford Sound with coronavirus and flooding hitting hard.

On a busy summer day, about 4000 people could visit.

That has been down to a couple of hundred for the past few weeks as the only visitors in or out have been flown there before today.

"It's going to be significantly improved on just having flights," Wilson said.

"But it's certain we'll get nowhere near back to full patronage while we've only got that limited avenue of coaches."

Up until today, essential service vehicles were the only ones able to access the tourist destination. "I think the key thing for them is to enjoy the experience to go to Milford Sound. Milford is back open for business so it is about experiencing the drive in and experiencing Milford Sound and taking the opportunity to get out on the water," Thompson said.

"What I'd want them to know is it is open, get on a bus and get in there and have a look."

"We've got about six going in so we're very pleased about that. This is going to be a long recovery and we're going to celebrate every milestone as get there," Hunter said.

"I think there's a lot of pent up demand so we're going to be full for quite a few days.

"The team in at Milford are certainly ready to meet more guests coming through. Clearly on the good days in the last couple of weeks people have been able to fly into Milford and do a cruise. But they're relatively small numbers," Norris said.

The lower visitor have meant some tough decisions have been made.

Real Journeys has cut its Milford cruise trips by half, running only three of its five summer vessels.

"One vessel we've actually redeployed into Doubtful Sound, but we have still had to tie up one vessel for the summer season." 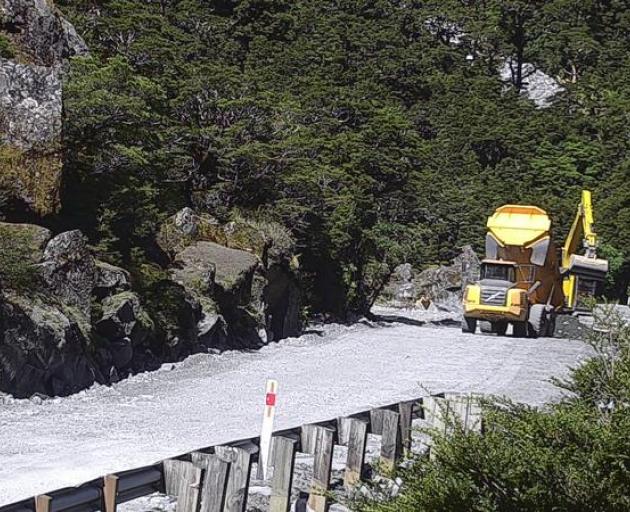 Milford Road after a route was cleared to make it useable. Photo: NZTA
Seasonal contract staff, who were expected to work for the next month or two, were given the option to be redeployed into other parts of Real Journeys or accept a voluntary redundancy, Norris said.

On Thursday, several tourists along the Te Anau foreshore lamented the convoy schedule.

Singaporean traveller Shan missed out on her booked visit by one day.

"Disappointing of course, and then we had to book last minute accommodation back to somewhere near Queenstown ... because we didn't have a place to stay since Milford Sound was cancelled. We booked accommodation there," she said.

She will be getting a refund, but said her next Milford attempt might be years away.

Ian Johnson also had some bad news about his Thursday booking.

"Here we are ready to leave ... and the tourist buses are starting again. Unbelievable," Johnson said.

Fixing Milford Road is not going to be a quick, cheap or easy task - the repair work is expected to cost million of dollars.

Thompson said even setting up convoy access had been a mammoth task.

"The rainfall event has opened up a big bunch of new slips for us so in Fiordland, they're very steep, they have a lot of material on them and they take a long time to settle down so this rainfall now will bring more material. It is something we will just have to continue to watch and some of them will be with us for years," he said.

Convoys are expected to get underway from 10am.