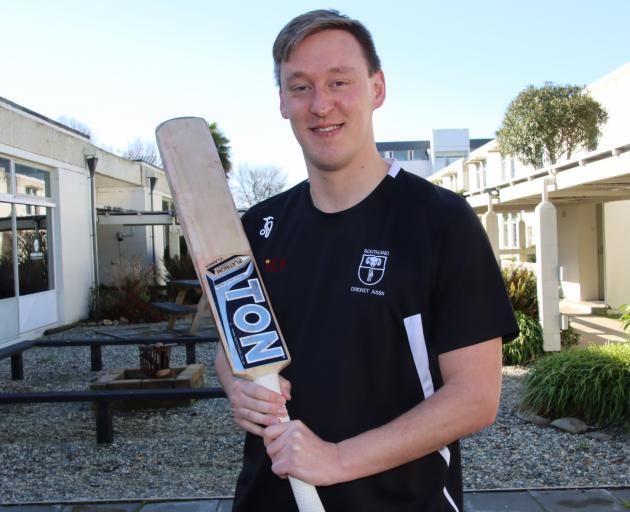 Southland Cricket development officer Jack Hilton, originally from Scotland but in Gore on a work visa, is enjoying his time teaching young people how to play cricket and encouraging them to take up the sport. PHOTO: SANDY EGGLESTON
Even with a travel agent mother working on his behalf, Jack Hilton is here until travel restrictions ease.

The Southland Cricket development officer who grew up in Scotland has not been able to travel home because of Covid-19.

Hilton said after he finished a history degree in 2017, he came to Southland to take up the cricket development role.

He had some experience working with pupils and encouraging them to take up the sport in Edinburgh while he was at university.

Initially, he had planned to come for one summer.

"I thought, I will have a great time and learn a lot but then I’ll be happy to get back home and continue what I was doing."

He enjoyed it so much he came back for a second year and a third.

Unable to get a flight home, he stayed on during the winter, spent the summer coaching but then flights were cancelled again and now he was here for another winter.

His parents owned a travel agency but could not find a flight home for him.

"Mum rang me up and said that I was the only customer she hadn’t managed to get back home, which was quite funny being their son."

Now, he is thinking he would like to stay permanently.

He was very enthusiastic about passing on his love of cricket to young people.

"I see so much potential."

After being in the role for four years, he had been able to plan ahead as to how he wanted the programme to run.

When the Gore High School sports co-ordinator job came up, he was the successful applicant, which has given him work in the winter.

Playing cricket for Waikoikoi has also been a highlight of his time here.

He was born in England but moved to Scotland when he was about 4 years old.

His father was a keen cricketer and Hilton learned to play at home when he was 6 or 7.

"Being the older brother, I used to force [my brother] to bowl at me for hours on end in the back garden."

His brother had the last laugh.

"He ended up being the fast bowler who played for Scotland age groups."

It might not be a well-known fact but cricket was a popular sport in Scotland, he said.

"There was a stat a few years ago there were more cricket clubs per head of population in Scotland than anywhere else in the world apart from India."