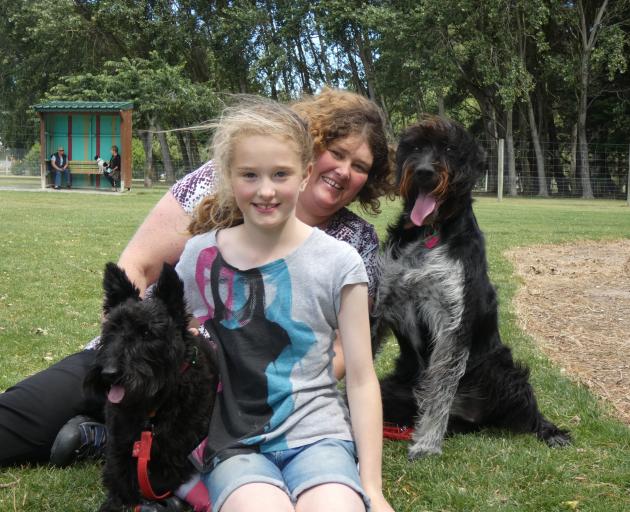 Colleen Wells and daughter Lily (9), of Invercargill, with their dogs, Bonnie (left) and Poppy, at Elles Road Dog Park in Invercargill this week. Photo: Ben Waterworth
Dog registrations in Southland  remained steady in 2018,  statistics from the region’s three councils show.

Information released under the Official Information Act (OIA) there were a total of 25,628 registered dogs in Southland.

Both the Southland District Council’s and Invercargill City Council’s dog registrations remained on par with 2017 numbers at  13,500 and 8662 respectively.

The Gore district showed a slight increase of 138 registrations last year compared with 2017.

That was because of  the "nature of the district, which is a lot of agricultural activity and that requires a lot of working dogs".

and farmers often kept several dogs on their properties.

The Southland District Council had the cheapest registration cost for non-working dogs,  the top registration fee being $90 before any discounts were applied. Gore had the most expensive at $120.

However, at $25, Gore  had the cheapest working dog registration cost. Working dogs in the Southland District Council’s area cost $30 to register, and  in Invercargill  they cost $35.