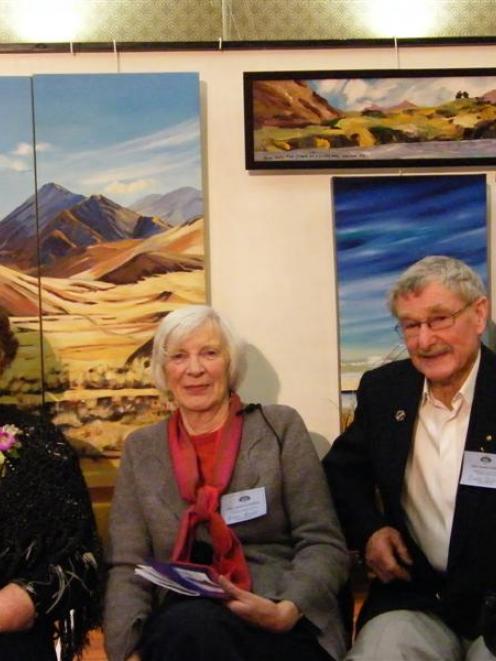 The exhibition, which runs until July 26, opened on Friday night to an eager public, hungry to see what art was being exhibited and available to buy.

Riversdale Arts group president Debbie Schriek, of Riversdale, said in her opening speech, she and six of the group's committee members were at the centre putting up the artworks when the Fiordland earthquake, measuring 7.8 on the Richter scale, hit.

Mrs Schriek said everything swayed and shook and, to make matters worse, the power went out and it was a scramble to find a torch and not trip over any of the artwork.

‘‘It was definitely a scary experience,'' she said.

At the opening, guest artist Phil Newbury, of Invercargill, spoke about the artwork he sculpts from glass and told an amusing story about his travels in the Middle East in 1994.

He said he had received a job offer in Saudi Arabia from a friend and decided to take the opportunity.

When he was in the oil-rich Muslim nation, he was staying in a building next to a mosque and was woken every morning at dawn by the loud call to prayer.

To solve the problem, a friend suggested he listen to some music and gave him a CD in Arabic.

He said he vaguely recognised the tunes and the female voices, but only realised he was the butt of a joke when his Muslim co-workers pointed out the CD was the Spice Girls in Arabic.

Newbury was voted the most popular artist of the exhibition on Friday night for his glass sculptures.

Committee member Margaret Erskine, of Wendon, said Saturday was very busy and three days after the opening on Friday night, 110 artworks had been sold.