Gore-based bulb-exporting business Southern Flora is battling its way through a prolonged financial trough.
Southern Flora general manager Paul Wessels said while the past financial year had been ‘‘quite critical and stressful'', the company had turned a financial corner and he was optimistic about its future.

The company's annual report stated that Southern Flora had had its most challenging year to date.

"The company has only managed to survive this extremely difficult year through the support of its biggest shareholder Norana Lilies Ltd, which has advanced significant cash loans and has had to guarantee the BNZ advances," company chairman Richard Goodson said in his chairman's letter attached to the annual report.

Mr Wessels acknowledged the company's financial future was in serious doubt until the funding from the bank and Norana Lilies was secured and a new major Dutch client was signed up.

Although the Gore-based company had met its social objectives of providing employment and spending money in the local economy, it had failed to give shareholders a return on their investment in its 20 years' of existence, Mr Wessels said.

In a letter to shareholders, Mr Goodson said $800,000 was paid annually in workers' wages and a further $1,900,000 was paid to businesses for services and supplies.

Southern Flora's financial struggle had begun when the company was formed. It had been set up on a large percentage of borrowed capital and any money that was made had been poured back into servicing loans, he said.

"Any profit goes into interest payments to the bank and various lenders," he said.

"Any company that is debt-ridden to the hilt, so to speak, is struggling," Mr Wessels said.

As well as having to borrow a large amount of capital, the company was also paying a premium of 2 to 3 per cent interest on top of the normal interest rates on loans because it was in a high-risk, niche industry, he said.

The company had also been ‘‘hammered'' by the exchange rate for years. However, that had eased in recent times but the global price paid for lily bulbs had tumbled recently, he said.

There was a 22 per cent fall in international market prices, he said.

Mr Wessels said the company had put in place strategies that resulted in more efficient ways of operating.

The company was planning to employ between 70 and 90 seasonal workers during June, July and August. However, two to three years ago the company was employing as many as 120 people.

The company's customers comprised three major buyers, two of which were based in Holland, and about six small domestic customers.

The company was making every effort to overcome its financial difficulties and was expected to increase its volume of bulbs produced by 50 per cent. It was hoping to harvest between 13 million and 14 million bulbs this season.

Gore District Mayor Tracy Hicks said yesterday Southern Flora had been involved in the district for several years and had made a valuable contribution to the community.

Mr Hicks hoped the company would be able to overcome the challenges it faced and secure a viable, long-term future in the district.

However, many businesses were facing similar financial pressures to Southern Flora's because of the uncertain economic climate.

‘‘Unfortunately that's the times we live in,'' Mr Hicks said.

The old man and the waka still not at sea 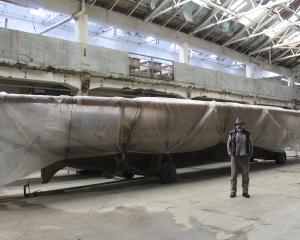