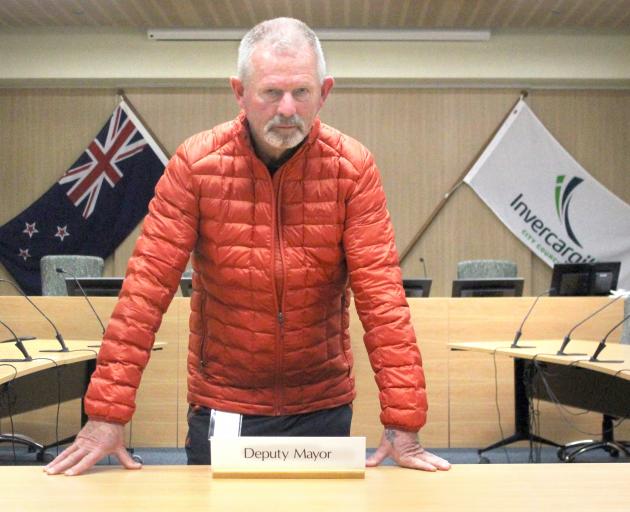 Nobby Clark was a key player in a six-month review carried out by Richard Thomson which highlighted a possible resignation of the deputy mayor. PHOTO: LUISA GIRAO
Invercargill's deputy mayor says the stress and huge workload of his job have made him think about resigning, as recently as this week.

Nobby Clark said last year was one of the most stressful in his life and the increased workload and tensions with Mayor Sir Tim Shadbolt had a huge effect on his wellbeing.

The document said the council was in a better place than it was six months ago, but again raised issues about Sir Tim’s performance. It said Sir Tim was an ‘‘unavoidable and inconvenient distraction’’ and the rest of the council just had to ‘‘get on and make things work’’.

Much of the positive turnaround at council is attributed to the better relationship among elected members and to Cr Clark’s performance as deputy mayor, saying he has filled the leadership void highlighted in Mr Thomson’s original scathing review of the council’s performance.

However, Mr Thomson also raised concerns and noted a potential resignation of Mr Clark as a risk ‘‘given the increasingly difficult relationship which exists between him and Sir Tim’’.

Mr Thomson stated other councillors could step up to this role, should the risk eventuate.

However, it was unlikely that any of them would be people the mayor would want to appoint to the role, he said.

Cr Clark admitted to the Otago Daily Times yesterday he had thought about resigning more than once during the past year, and as recently as this week.

He often woke up in the middle of night, anxious about council issues and this was affecting his home life, he said.

When asked if the thought of resignation was still on his mind, he confirmed the idea was not completely excluded.

‘‘But I’m mindful that there has been not only a stress factor for myself, but also for my partner [Karen Carter] who has to wear all my stress.’’

He said Ms Carter was really worried about him.

‘‘She is my scaffolding, she keeps me going. Without that or her, I can be a risky person.’’

Reasons for not resigning included the improvement in relationships around the council table, the cost of holding another by-election and him knowing he had work still to do.

He was proud Mr Thomson had recognised and acknowledged his efforts since the first report was issued.

‘‘He [Mr Thomson] was very critical of me on the first report. But I took on board his comments because, otherwise, it would implode everything. The tensions were already huge at the council.

‘‘I’ve done a lot of work around not to be confrontational, being more open to other people, which is not normally my style.’’

A lot of effort had been put in to building his relationship with council chief executive Clare Hadley.

‘‘So I’ve made a strong effort to do that and it has been a two-sided coin because Clare has made the effort as well.’’

But while his relationship with Mrs Hadley had improved, the tension with Sir Tim had escalated.

Cr Clark said his relationship with Sir Tim was now a ‘‘poor one’’.

‘‘If I see him in the council, I would say hello to him and vice-versa. Occasionally, he asks me something, but it is not a strong relationship at all.’’

The challenge now was to ensure council’s efforts in building relationships resulted in tangible outcomes for the city, he said.

He was still frustrated decisions had not been made about the Southland Museum and Art Gallery and Anderson House, he said.

‘‘The report is about chemistry and relationships. Chemistry is important [but] ... it is only part of the jigsaw puzzle and now we need to sort the other pieces.’’