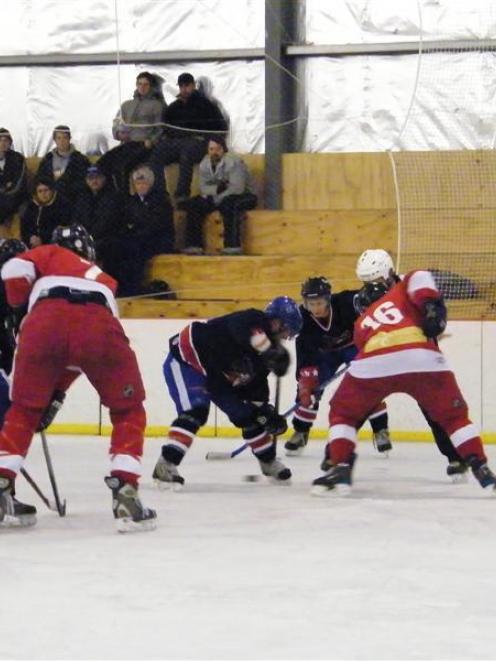 The Tekapo Bull Tahr players (in red, from left) Geoff Brooks and Bryan North face off against Queenstown Rangers players (from left) Angus Strain, Mark Shearer and Jesse Rout in the final of the Erewhon Cup at the ice rink in Gore on Sunday.
Ice sprayed and skates squealed when Gore hosted an ice hockey tournament at the ice rink in the Gore Multi-Sports Complex at the weekend.

A total of six teams competed at the Erewhon Cup held from July 17 to 19. The teams were the Gore Grizzlies, Alexandra Flames, Queenstown Rangers, Tekapo Bull Tahr and the South Island Hockey League (SIHL) Women's team and Junior team.

Ice Sports Southland ice hockey representative Jan Goulding said the SIHL teams were ineligible for points as the teams' rosters were seven more than the 10-player roster for the tournament.

Murita Soper, who has been involved with ice hockey in the Southern region for 18 years, said the Erewhon Cup was the first organised ice hockey tournament in New Zealand.

The first tournament was played at Opawa, near Albury in South Canterbury in 1937 and the cup was donated by Wyndham Barker, of Erewhon Station, Mrs Soper said.

She said the cup was traditionally played on outdoor ice rinks, but this year Gore hosted the cup at its indoor rink.

‘‘We had never hosted the full tournament before, but one year we hosted the final when the weather in Tekapo was bad,'' she said.

Gore Grizzlies player Dave Dunlop said it was a good tournament to be involved with, even though the Gore side lost all four of the matches it played.

‘‘We are not up to the level of Tekapo and Queenstown,'' he said.

He said it was hard to compete against those teams, but it was good to see that level of hockey being played in Gore.

Gore lost its first game to Alexandra Flames 3-2 and was then defeated by SIHL Women 4-2 and Tekapo Bull Tahr 9-nil on Saturday. In the semi-final on Sunday, Gore lost to Queenstown Rangers 10-2.

In the final, Tekapo played Queenstown, Tekapo won 3-1 and ended Queenstown's eight-year stranglehold on the cup.

Queenstown Rangers captain Simon Wilson said the team was hoping to make it nine and even though they were disappointed to lose the final, they had a good time at the tournament.

‘‘We will definitely be back next year to get some revenge,'' Wilson said.

Tekapo Bull Tahr assistant manager Bryn Murray said the cup was the first tournament Tekapo had entered this season and was pleased to walk away the champions.

He said he hoped winning the cup would generate more interest in ice hockey and attract new players to the sport.

He wished to congratulate the volunteers for organising a great tournament and Queenstown player Brett Speirs, who was the most valuable player of the tournament.