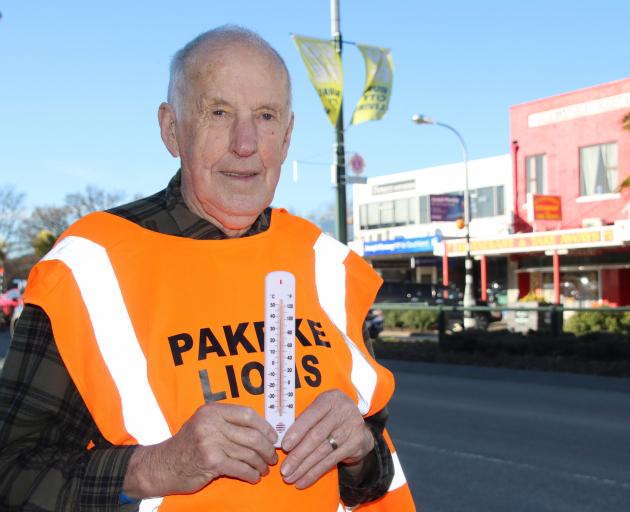 Gore Pakeke Lions Club secretary Douglas Dixey might only have this hand-held thermometer to tell him what the temperature is in the town, but the club is paying for a new gauge to replace the one that failed earlier in the year. PHOTO: SANDY EGGLESTON
The highs and lows of Gore’s weather will soon be on display again in the town’s Main St.

The Gore Pakeke Lions Club are paying for a new temperature gauge which will be installed in the same place as the former gauge.

Earlier this year the gauge stopped working and was taken down.

Lions club secretary Douglas Dixey said the original temperature gauge was given to the town to mark the 25th anniversary of the club in 2011.

At first the gauge caused no end of bother.

In March 2012 The Ensign reported the display recorded the temperature was 11degC for a week.

A week later, the temperature hit a high of 96degC.

This time, when the gauge was sent away, the repair was estimated to cost $6000.

“We decided we would like to provide a replacement and have informed the council of that,” Mr Dixey said.

Gore District Council communications and marketing manager Sonia Gerken said when the former gauge was inspected to see why it had stopped working, it was found to be missing its cover.

‘‘Technicians found the exposure of the electronics to the weather during this time had caused considerable damage,’’ Mrs Gerken said.

A new LED message display board, showing both the time and temperature, would cost $2690.