Three-bin recycling service is revisited by GDC in draft plan 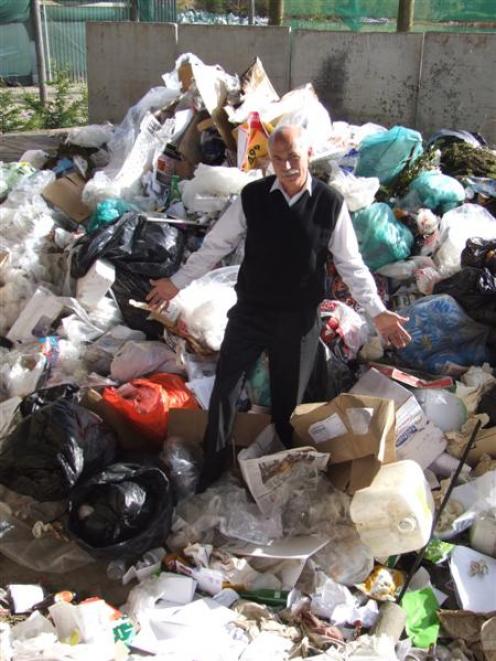 Gore District Mayor Tracy Hicks is looking forward to a more orderly rubbish collection system which will result in greater recycling.
Gore District Council is revisiting what is likely to be a contentious issue - that of introducing a three-bin recycling service for urban areas, which could lead to a 12 per cent rates spike for the 2012 year.

The idea of introducing the threebin service has been listed in the draft Long Term Council Community Plan which is presently the subject of public consultation.

In November last year, the council agreed in principle to be part of a Southland-wide recycling service, in association with the Invercargill city and the Southland district councils.

Gore District Mayor Tracy Hicks said the introduction of a three-bin recycling service could be contentious as it would involve a spike in rates.

In 2006, the council considered the introduction of recycling services, but the results of the public consultation were inconclusive and it was decided it was too expensive for the district.

However, the council's 2008 resident survey showed 55 per cent of respondents indicated they would use a kerbside recycling service, in association with other Southland councils.

Mr Hicks said if the joint venture went ahead it could result in cost savings and an efficiently run service.

The cost of the new service had been estimated at about $160 per household per year extra, if the total cost was spread across the whole district it would equate to a rate rise of about seven per cent, but because only the urban areas would receive the new three-bin service the rise would be about 12 per cent, Mr Hicks said.

The cost of a private wheelie bin service was about $220 per year with fortnightly empties. Plus, those ratepayers were also paying the Uniform Annual General Charge and an urban refuge collection charge which totalled $97, council utilities manager Ross Haslemore said.

However, Mr Hicks was keen to ensure that private contractors who had ‘‘put their money where their mouth was'' when setting up business in the town were treated fairly.

Another advantage of the threebin system was that a green waste bin would probably cut down the number of visits residents would have to the transfer station, Mr Haslemore said.

‘‘The three-bin system is the preferred option,'' Mr Haslemore said.

Another factor which might make the proposal more attractive was the financial impact of new transfer station charges relating to the introduction of the Waste Minimisation Act, which would be introduced on July 1. A levy of $11.25 per tonne would be charged from that introduction date, Mr Haslemore said.

The three-bin service might also cut down on illegal dumping of rubbish in public places including roadsides, Mr Haslemore said.

‘‘There should be no need for it,'' Mr Haslemore said.
One concern the council was investigating was that of smaller households that would generate less waste and would not need three bins.

One option being explored would be a stacked draw system that had a smaller capacity.

Environmentally, the system would have benefits, as plastic bags blowing around at the transfer station had been a continual problem and this system would stop that problem, he said.

Another advantage would be that green waste, which was previously left at landfills and could result in the production of methane gas, would be eliminated, council general manager of district assets Paul Withers said.

Paddy's Bins co-owner Gary Weir said he had had initial discussions with representatives from the three councils and they had indicated one main contractor would be appointed for the whole of Southland and that contractor might sub-contract out areas or might decide to collect rubbish region-wide themselves.

‘‘It basically takes us out of the picture,'' Mr Weir said.

While people often thought recycling was the ‘‘answer to everything'', in the present global economic climate the market for recyclables was extremely depressed, Mr Weir said.

He is unconvinced the collecting of green waste and depositing in one compost area is the ideal answer.
Mr Weir believed it would be better to encourage individuals to carry out their own composting and that would cut down on transportation costs.

‘‘There are lots of pros and cons,'' he said.
The ultimate answer to the everincreasing amount of rubbish generated was to encourage manufacturers to change the way they packaged goods, he said.

- Submissions on the plan should be sent to the council by 5pm on Friday, May 8.