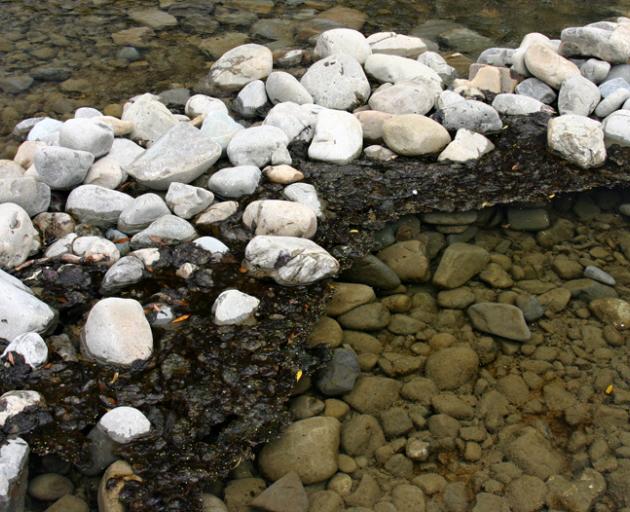 Benthic cyanobacteria. Photo: Supplied
People are being urged to be vigilant after toxic algae was discovered in a fourth Southland river.

Active warnings were already in place at the Waikaia River at Mahers Beach, the Hamilton Burn at Affleck Road, and the Waiau River near Excelsior Creek.

"We can't assess every reach of every river, so it's really important that people know what to look for and take a cautious approach to swimming and walking dogs off-lead along rivers," he said.

The toxic algae could be recognised as a green/brown slime on rocks or dark brown/black mats at the water's edge.

There were several factors that could contribute to the growth of toxic algae, including a sudden increase in temperature, low flows, high levels of nutrients and run-off into waterways.

Similar growth was likely in other parts of the region with the warmer weather, he said.

People and animals should avoid contact with the river and be mindful of potential health risks until warnings were removed.

The algae could produce toxins that were harmful to people and animals if swallowed, or through contact with skin.

Anyone with health symptoms after contact with contaminated water should visit a doctor immediately.

If people were concerned that any animals had consumed toxic algae or contaminated water, they should be taken to a vet immediately.

It is a sad indictment of all Environment Southlands years of rating, that there is this toxic algae in our rivers, summer playgrounds.