Toxic waste in Mataura won't be removed this year 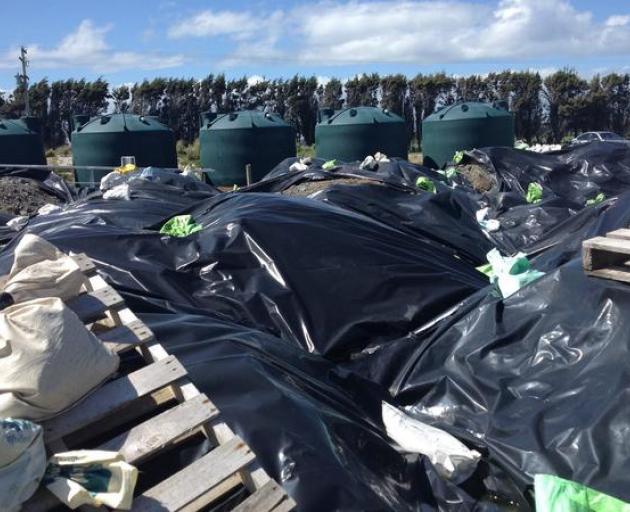 Photo taken in November 2017 allegedly of toxic waste being stored near Ballance, Southland. Photo: Sort out the Dross Facebook page
Hopes the thousands of tonnes of toxic waste stored in Mataura would be removed this year are now gone.

The Environment Court mediation between the Environmental Defence Society and the waste's producer New Zealand Aluminium Smelters and their owner Rio Tinto continued this week.

The society had hoped the court action would expedite the removal of more than 8500 tonnes of ouvea premix, which releases deadly ammonia gas when wet.

But in a minute issued today Environment Court Judge Laurie Newhook said it would not be removed this year.

"The problems encountered in recent weeks are complex but not, in my current assessment, intractable," the judge said.

"I am therefore hopeful for commencement soon of accelerated removal of ouvea premix from Mataura, for placing in containers suitable for safe and secure storage of the product pending its disposal overseas.

"As will be apparent, this will obviously not be concluded by Christmas as previously hoped."

"Before Christmas it's unlikely that anything further will be able to be resolved. It is a toxic site that has potential risks . . . whilst the situation is a cause for concern, I wouldn't want to unduly alarm people," Parker said during question time.

Rio Tinto, the smelter's owner, negotiated a deal in early 2018 with the government and local councils to clean up the waste over six years.

But this year the waste was threatened by flooding and fire, adding urgency to need to remove it from Mataura's disused papermill.

Taha Asia Pacific moved 10,00 tonnes of the waste - a waste by-product resulting from aluminium production at the Tiwai Point smelter - into the Southland town without permission and then went out of business.

Gore District Mayor, Tracy Hicks, said he was disappointed with today's development and it would come as a blow to the community.

"We just want it gone and have wanted it gone for quite some time now," Hicks said.

"We really thought we were going to get this over the line before Christmas so if that's not going to happen I'm very disappointed. But I know it's the source of quite a bit of focus within the Environment Court as we speak."