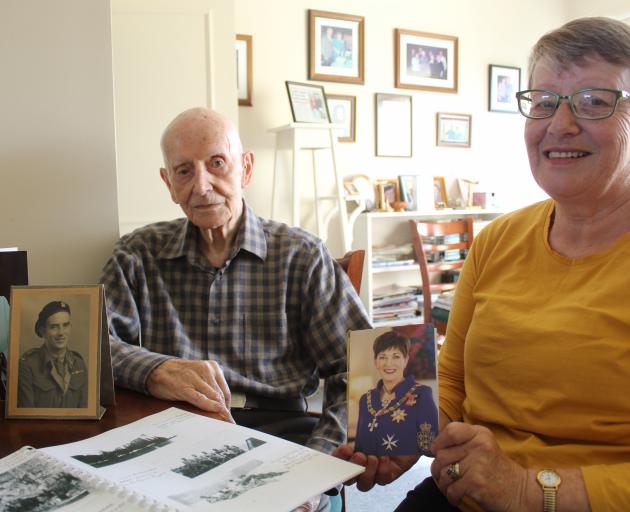 He also celebrated his 100th birthday with family, friends and neighbours.

Among his many cards are two with gold tassels from the Queen and Governor-General Dame Patsy Reddy.

He lives independently in a cosy townhouse in Winton, surrounded by photos of family and memorabilia from his long, colourful life.

Born to Catherine and Henry King and raised in Wallacetown, he was one of seven children, having a brother and five sisters.

Growing up on a farm close to Wallacetown School, Mr King and his siblings only had a short walk to school.

Living on a farm with cows, sheep and a large vegetable garden also had other advantages.

‘‘We lived right through the Depression ... we survived.’’

He left school at 15, saying he had ‘‘learnt enough to spell and count’’.

He had ‘‘had enough’’, so headed down the road to work at the Underwood Milk Factory.

But ‘‘war interrupted things’’, resulting in four years’ army service in the Pacific including in New Caledonia, Guadalcanal and New Hebrides for 18 months before returning to New Zealand and being redeployed to Italy for more than a year.

‘‘The Japanese came in, and we stayed till the end, then I came home, then I was sent to Italy.’’

Aged only 22, on October 17, 1943, Mr King was one of many New Zealanders who took part in the landing at Mono Island in the Solomons against the Japanese.

‘‘It was the first time since Gallipoli [1915] that a British force [New Zealand troops] had landed in a sea landing against enemy fire.’’

Mr King said he was ‘‘always looking for adventure’’, which while serving in the army could have had serious consequences.

‘‘I jumped the fence a few times in New Zealand ... and there were a few times I could have got myself killed.’’

After the war, he returned to the milk factory, where he worked alongside his future wife, Florence (Flossie).

They married in 1946, eventually having six children — four boys and two girls — and lived at Makarewa for 37 years before retiring to Winton in the early 1980s.

He also spent 20 seasons at the Makarewa Freezing Works and was a groundsman at Southland Boys’ High School in Invercargill for five years.

It was his youngest sister Florrie’s death, in 2008, which spurred him to write his memoirs, well over 150 pages, which had since been published.

‘‘I had turned 80 and decided to write my memoirs. Florrie was the last one [of my siblings].’’

There were many times to remember and much to celebrate yesterday.