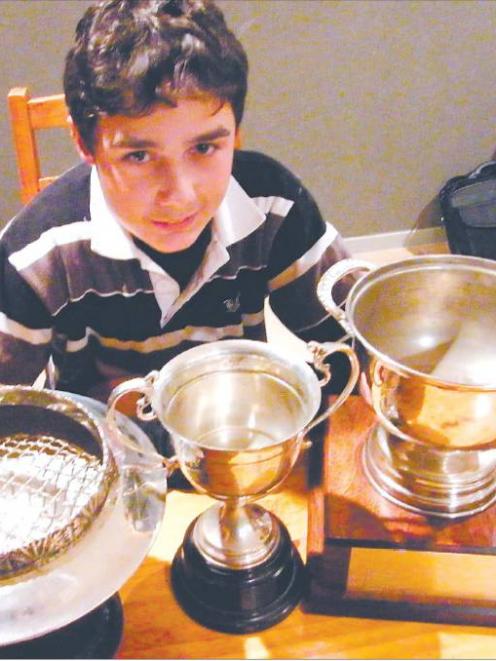 Gore High School pupil and golfer Sam Brinsdon (13), of Gore, with three of the trophies he has won in his first year of playing the sport.
A young Gore golfer has had such a meteoric rise in the sport that he has been selected for the Southland Under-16 Golf Team.

The team will compete at the South Island Age Group Stroke Play Golf Tournament at the Methven Golf Club on May 23 and 24.

His current handicap index is 10.8.

At the tournament in Methven, teams of five compete in under-16 and under-19 sections. Sam is by the far the youngest golfer in the team.

On May 3, Sam won the intermediate grade of the Taieri Junior Classic golf tournament, in Mosgiel, with a nett score of 68.

He was noticed by the Southland selectors after the tournament.

"I got an email about a week later telling me I was in the team," Sam said.

He said his nana, Anne Brinsdon, got him into golf and she sorted out his handicap and membership to the Gore Golf Club when he first started.

Among his golfing titles and trophies, Sam won the Aitken Memorial Trophy at the end of last year in Gore with his nana, who was his pairs partner.

He has also won the F J Townsend Cup in the Junior B Club Championships held in Gore at the end of last year. At the champs he also won the Easterbrook Cup for the best nett score in the Townsend Cup qualifier.

Tiger Woods is among his golfing idols, as well as his uncle Peter Brinsdon, who is a former Southland number one golfer and a former professional golfer.