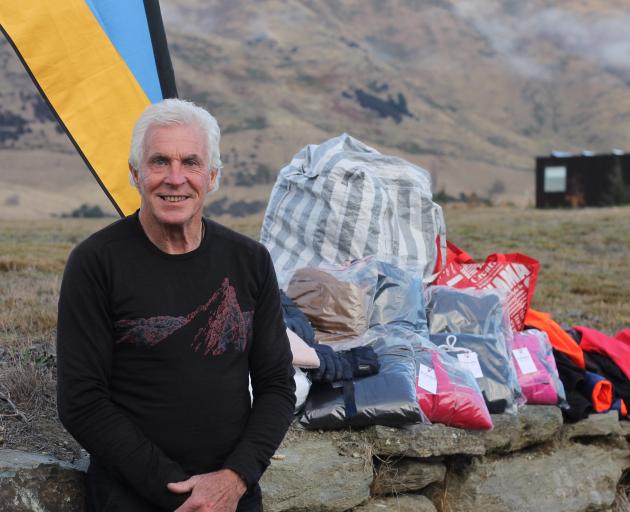 Wanaka Rotary Club co-ordinator John Milburn stands with some of the three van loads of winter clothing and bedding collected by his club and the New Zealand Red Cross Invercargill settlement team for former Colombian refugees settling in Invercargill. PHOTO: ASPEN BRUCE
Van loads of winter clothing have migrated south from Wanaka this year to support Colombian refugees, thanks to the hard work of two regional charities.

The Wanaka Rotary Club and the Invercargill Red Cross started their drive in early May to equip refugees with the resources for a fresh start.

"We have had to turn down some later offers due to the sheer amount of contributions made," Mr Milburn said.

He credits the “folk of Wanaka who really got on board" and displayed generous support.

"There’s some amazing jackets and bedding which will make a real difference for the families arriving. It has been an amazing response." Mr Frazer said.

The donations will go directly to refugees coming from warmer climates such as Columbia.

Due to their circumstances, refugees rarely had adequate resources to equip themselves for the cold winters in Central Otago and Southland.

Mr Frazer has previously highlighted the significant difference the items will make.

"A warm jacket means that someone can leave their home and go to an English-speaking class in winter. This gives them the language skills to go on and find a job."

In a normal year, pre Covid-19, the Red Cross Invercargill supported as many as 90 Colombians settling into their new lives.

In 2021-22 Immigration New Zealand said between 750-1000 individuals were expected to be resettled in New Zealand.

Since World War 2, New Zealand has resettled more than 35000 refugees, with a formal annual quota first established in 1987.

Refugee quotas are determined in three year cycles by the ministers of immigration and foreign affairs.