45,500km of cycling tour from Arctic to Argentina 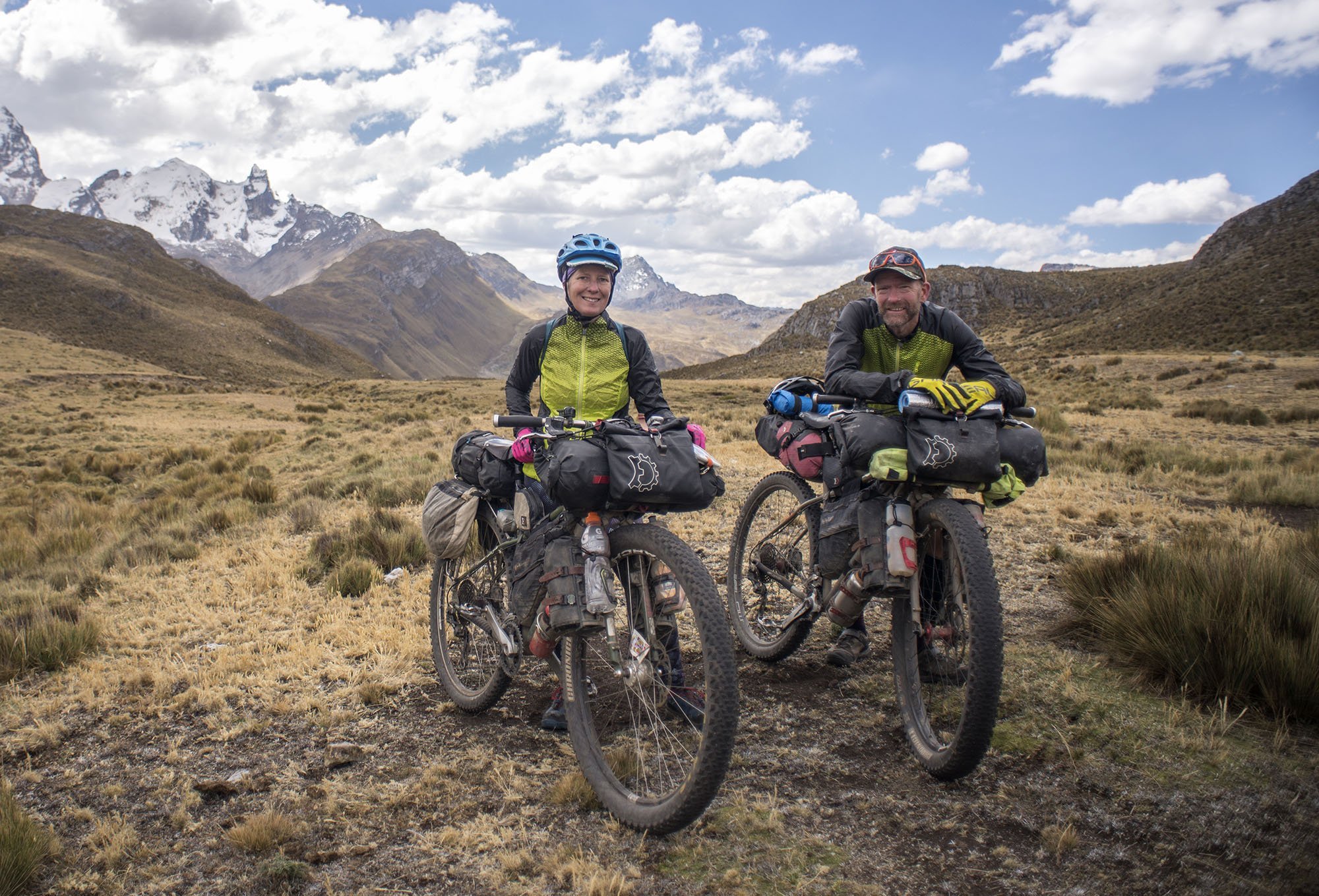 Mark Watson (right) and Hana Black, of Lyttelton, spent four years cycling from Alaska all the way into South America. Watson is a speaker at the New Zealand Mountain Film Festival in Wanaka and Queenstown in June and July. PHOTO: SUPPLIED
Adventurer Mark Watson has discovered the satisfaction of self-propelled long-distance journeys and is keen to complete unfinished business in South America. He talks to Marjorie Cook.

Exploring personal boundaries and paradigms and other countries and cultures is something Mark Watson cares deeply about.

Next month he will share some of his thoughts with the audience at the New Zealand Mountain Film and Book Festival in Wanaka and Queenstown.

Watson, a Lyttelton photographer and writer, intends to talk about a gnarly 45,500km, off-road cycle adventure from Alaska to Argentina that he and his partner, Hana Black, undertook during 2016-20.

Black, a garment technician for the Kathmandu outdoor equipment company, will also be presenting a bike-packing workshop for people interested in lightweight cycle travel.

Devastatingly for Watson and Black, the Covid-19 pandemic stopped them just two months shy of their destination in Ushuaia, at the southernmost tip of Argentina.

The couple had to pack up and fly home from Chile to New Zealand, arriving just 36 hours before the country went into lockdown in March 2020.

"After four years in the Americas, we were still into it and still on the road and it is something we would love to get back to doing ... In the next couple of years, we want to go back," Watson told the Otago Daily Times this week.

Watson is no stranger to the great outdoors in Otago and Southland but this is the first time he has been invited to speak at the festival, founded by Mark and Jo Sedon in Wanaka in 2002.

He has a passion for the Darran Mountains in Fiordland, which draw him south every year to climb and explore.

He has also climbed Mt Aspiring several times, enjoyed multiple tramps and bike rides throughout Otago and is eyeing up his first climb on Mt Earnslaw.

The Dunstan Rd, Rough Ridge and Lake Onslow areas have also been providing the adventurous couple with good reasons to keep their tyres rolling in the back-country.

Last summer, they made their first attempt at the gruelling Te Waipounamu multi-day bike-packing race from the top to the bottom of the South Island, which they finished in nine days. Black was fourth woman. Watson was well down the men’s field.

Cycle tourists had to be prepared to do the unexpected, for example, pushing bikes uphill for four days in the pouring rain in the Andes, he said.

"People ask, why do you do that? But when you start doing it, you realise, it’s not so bad. You have to come to a place of acceptance. If you can’t achieve that level of acceptance it becomes a whole lot harder," he said.

Watson has published three adventure books on New Zealand topics since 2015 and it should be just a matter of time before a book on the Americas adventure emerges.

"Not yet but that’s an objective. The trip was cut short and we came home from Chile prematurely ... It was gutting but it was one of those things. [There were] too many questions and unknowns there so we decided to come home."

"It was an amazing journey, top to bottom. We started in the Arctic and finished almost in the subantarctic, crossed pretty much every climatic zone on Earth and spent a huge amount of time in the tropics. The Arctic to the Amazon and everything in between, following the pathways of mankind as the ancestors of the indigenous people of the Americas did, immigrating south, creating cultures as they went. We liked that theme of our journey.

"We were also following the American Cordillera, the contiguous mountain range of the continental divide ... For us it was about finding the remotest areas we could. We often had people thanking us for coming into their villages, telling us we were the first gringos that they had met." 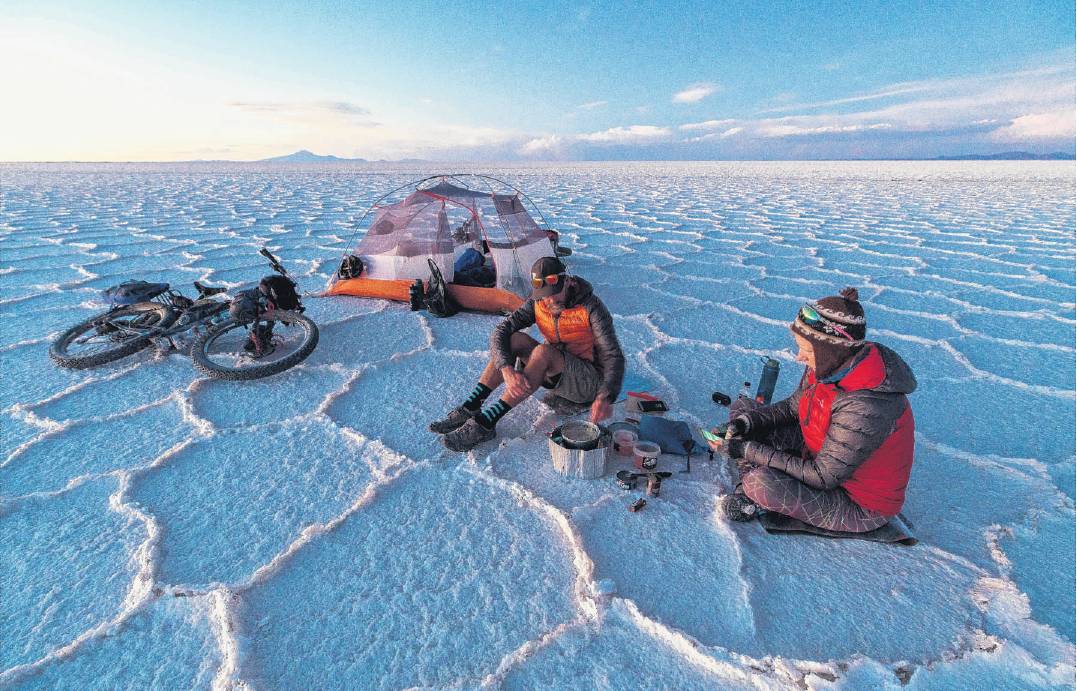 Watson and Black enjoy a brew on the salt flats of Salar de Uyuni in 2019. PHOTO: MARK WATSON

Watson and Black’s first cycle tour was a nine-month expedition from China to Sumatra in 2011.

The couple came home when their finances ran out and spent the next four years working and saving to pursue their Americas dream.

When they were ready to go, they sold their house, stored all their possessions and hit the road, eager to explore.

The only thing Watson came to dread was the morning pack-up routine. "It always took a little longer than I would like but in the scheme of things, it was better than going to work".

After crossing dozens of 4000m alpine passes, they took their first seriously long break when they reached Arequipa, Peru, and stayed for two months over the 2018-19 Christmas-New Year period.

This set-up proved suitable for the very sandy and rocky terrain they were encountering.

Apart from their bikes, the most essential equipment was a reliable tent and good sleeping bags, plus "a saddle that suits your bum and really easy gears for loaded climbing at high altitudes".

This coming summer, the couple hope to repeat the Te Waipounamu Race and do some other big bike-packing events, before focusing on South America.

Watson and Black have shared their passion for the outdoors for about 30 years now and have yet to have a serious argument, he said.

"We have very, very few arguments on the road. We consider ourselves a team and we bring different skills and strengths to the table. We share that sense of curiosity and adventure, trying to understand the world around us as well as what makes us tick. It is about extending our boundaries," he said.

The full programme is launched on June 1.