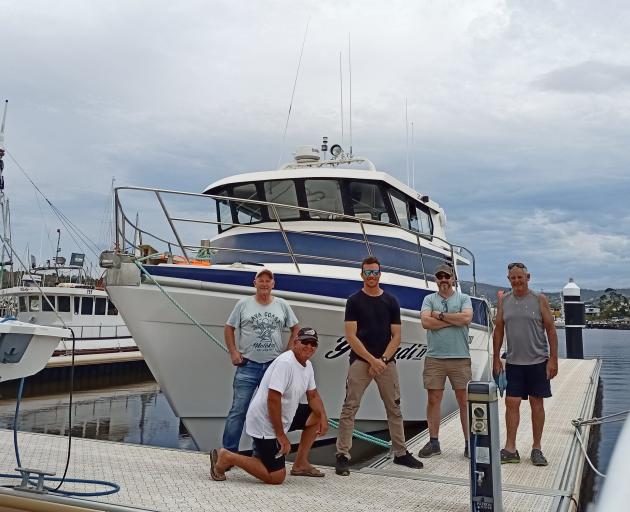 Stefan Schischka and Paul Maydon, along with three others, sailed into Nelson on Tuesday on a 20m commercial fishing boat from Tasmania.

After nearly six months in Australia trying their luck on the MIQ lottery, the men — none of whom knew each other before this month — successfully applied for a voluntary ‘‘job’’ sailing Hobart crayfishing boat Yuwindi 2 to its new owners in New Zealand.

The five men spent six days at sea before arriving at Port Nelson with an escort of Hector’s dolphins at 9am on Tuesday.

They will complete their 14-day Covid-19 quarantine period in isolation on the boat.

Mr Maydon, a Wanaka electrician, said the five men must remain on board and pass another Covid test before freedom next week.

‘‘It’s better than a hotel in Christchurch,’’ he said yesterday.

‘‘We saw whales, and Hector’s dolphins were our welcome into New Zealand waters. We are having a lunchtime beer at the moment and life’s good,’’ he said.

Mr Maydon had been working on an oil rig in Western Australia but has been in limbo in Australia since the transtasman travel bubble closed in July.

Mr Maydon said his crewmates were all in a similar situation with their Australian employers.

‘‘It is soul-destroying, it really is. You see there are 30,000 other people wanting to get into NZ. You look at social media and it is heartbreaking,’’ Mr Maydon said.

He was looking forward to reuniting with his wife Jacquie and daughter Fleur.

‘‘It is unfair that you have to go into a draw to get home ... The only way to describe it is cruel. I would have been exceptionally lucky to have got a spot before next February. I couldn’t see any other way of getting home.’’

Covid restrictions meant the boat’s new owners could not bring it to New Zealand themselves, so they advertised for a delivery crew.

Mr Maydon has had some experience with boats but sailing the Tasman Sea was a new adventure.

‘‘It’s the first time I’ve been across the Tasman. We were very lucky with the weather.

‘‘We had a six-hour window to clear out of Hobart. We had a tail end of a weather pattern to get through before we got into clear weather and then it was beautiful sailing.

‘‘People couldn’t believe how calm it was in the middle of the Tasman Sea. It was perfect. We couldn’t ask for any better.’’

The crew had plenty of food and supplies for the next seven days and would spend the time reading, listening to music, fishing and pretending they were camping, Mr Maydon said.

‘‘We are only in day 2 now so we haven’t gone stir crazy yet ... We have rigged up a tarpaulin and got ourselves a nice living area ... It is just like camping at the moment.’’