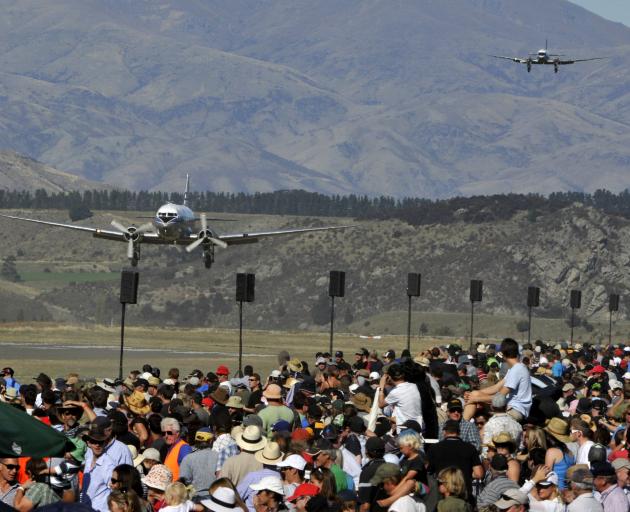 A large crowd of aviation fans watch as a Douglas DC-3 comes in to land during Warbirds over Wanaka in 2012. The cancellation of this year’s event is expected to affect businesses right across Otago. PHOTO: GREGOR RICHARDSON
The cancellation of Warbirds over Wanaka will have a knock-on effect for businesses across Otago, but business leaders are hoping visitors will still come to the region.

The popular airshow was expected to attract more than 55,000 people over three days at Easter, injecting about $40million into the Queenstown Lakes and Central Otago economy.

Organisers made the call on Monday to cancel the event in the wake of the country moving to the Covid-19 Red setting.

It was the second time the event had been pulled due to Covid-19.

Ignite Wanaka general manager Naomi Lindsay said the cancellation would be felt beyond the accommodation and tourism sectors.

"Cancelling these events is just devastating for us," Ms Lindsay said.

"Yes tourism is a big part of our economy but it’s the knock-on effect across the district.

"A lot of businesses were really relying on these events and long weekends to see them through. Without them its going to be tough."

Coupled with existing staffing issues and projected shortages once Omicron was spreading in the community, the general feeling among many businesses in Wanaka was a "little despondent", she said.

"There’s already been accommodation places with a lot of people cancelling bookings — some are still deciding to come to Wanaka which is great, but obviously Warbirds was the drawcard."

Wanaka Lakeview Holiday Park manager Natalie Ward said there had been a "trickle" of cancelled bookings but not as many as anticipated.

"Partly, I think people choose to come away over Easter Weekend," she said.

"An event the size of Warbirds has a major impact on the Otago and Southland regions," he said. "Historically we’ve seen people staying as far away as Roxburgh and Ranfurly over that weekend to attend the event. Many of those then stay on or travel around other parts of the region while here. The flow-on impacts will be felt in hospitality, retail and many other sectors, not just tourism. Hardest hit will be the accommodation businesses, who have had a tough run with all the uncertainty brought about by Covid-19."

Central Otago District Council economic development manager Nick Lanham said it was too early to place a financial value on the impact of the cancellation on the region, but was optimistic visitors would still come to the district.