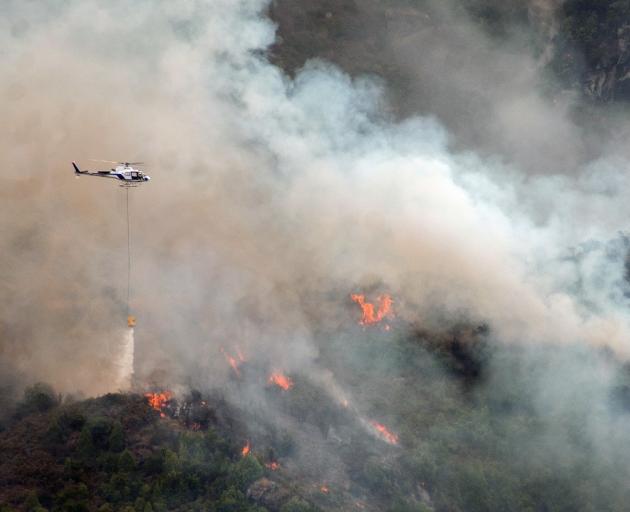 The blaze has ripped through 200 hectares of regenerating bush at Emerald Bay. PHOTO: SHANNON THOMSON
A popular Wānaka lake and track were spared during a devastating fire earlier this month.

The fire took hold on 9 January at Emerald Bay, burning 280 hectares of land and taking four days to contain.

The Department of Conservation said it was too early to know the full extent of the damage to conservation land.

"It is a really special track, literally hand built, initially by Stuart Landsborough of Puzzling World fame, and later by DOC. It has immense importance to local people and visitors," she said.

Hospital Flat and Glendhu Bluffs appeared to be the conservation land that copped the most damage.

"The greatest impact of this fire is likely the loss of mature lowland forest in a region where examples of this forest type are rare," she said.

"These conservation areas give public access to a lowland forest ecosystem in a region dominated by beech forest or drylands/grasslands."

An investigation into the loss of vegetation and ongoing ecological impact would be carried out by an ecologist once it was safe to access the land.

"Many of the plants present were mature, so regaining the same condition would take many years. We are not aware of any threatened native fauna in the fire area, but we know it has been a habitat for bird species such as fantail/piwakawaka, grey warblers, bellbird/korimako, pipits and introduced species like sparrows, skylarks and blackbirds.

She acknowledged the efforts of those involved to help fight and contain the fire.

A Fire and Emergency investigation was ongoing.