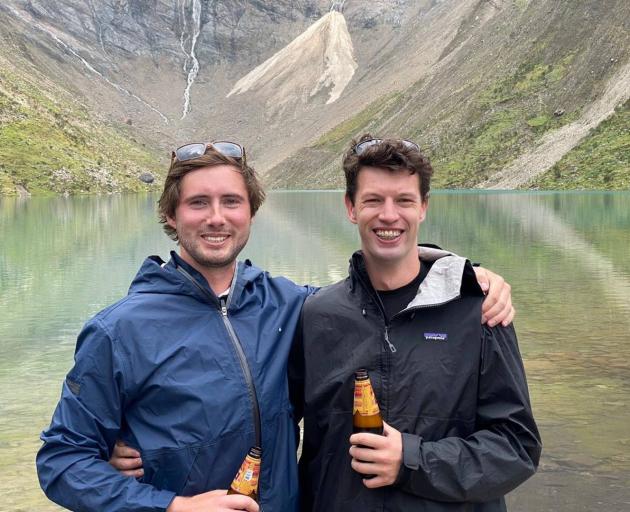 Conor Hayes (left) and Caleb Nicol have been travelling around South America over the past three months. Photo: Supplied
Desperate Kiwis stranded in Peru watching citizens from all over the world being repatriated by their governments say they are "frustrated" at New Zealand's lack of support.

Two dozen Kiwis had paid over NZ$5500 each for seats on a charter flight home via Australia, but were told two days before it left they could not board as there were no connecting flights to New Zealand the same day.

But this morning, hours before the charter flight would leave without them, they received an apology email stating there had been a mix up - but they would not be put back on the flight.

NZers in Peru: we are aware of the developments with the Chimu flight and understand how disappointing this is. We continue to work hand in hand with Australian embassy in Lima on future options for you to leave. We know you are there and are doing our utmost to help.

"It is incredibly frustrating," Caleb, 23 of Wanaka, told the New Zealand Herald from his hostel in Lima.

"Our Government told us to get flights on this plane, and then to have it stuff up like this."

To make matters worse, over the past few weeks Nicol and travel mate Conor Hayes, 23 also from Wanaka, have seen citizens from countries the world over fly home with government assistance.

"We are stoked for them, but each time it really hurts and feels like our government has just left us here."

There are about 90 New Zealanders registered with SafeTravel as being in Peru currently.

Most of them are trying to get back to New Zealand, but have been stuck since the country went into lockdown due to Covid-19 on March 16, and shut its borders.

The lockdown was initially meant to end on April 1, but has been extended to April 12, leaving stranded Kiwis increasingly concerned about their situations.

Nicol and Hayes have been travelling together over the past three months through South America and were due to fly home on March 19, but on March 16 were given 10 hours warning the country was going into lockdown and borders closing.

They got straight on a five-hour bus to Lima to fight for one of the last flights out of the country, but their efforts were to no avail and they have been stuck in a hostel in the capital city ever since.

"There has been all this talk of Kiwis having a window to get home - we never had a chance."

Australian tour company Chimu Adventures has organised charter flights with the Australian government to return its customers, offering up extra spaces to other stranded travellers.

Source: NZ Herald
New Zealanders have also been encouraged by the Ministry of Foreign Affairs and Trade to seek seats on these flights as a means to return home.

Nicol and Hayes both bought seats for the flight departing on March 29, at $5500 each, along with two dozen other Kiwis.

But late on March 27 they were told they couldn't board the flight, as on March 31 when it arrived in Sydney there were no ongoing flights that day to New Zealand, as required by new Australian border controls.

Nicol spent the next day working with a travel agent and discovered there was in fact a flight on March 31 with airline LATAM. They passed this detail on to Chimu, but never received a response.

"We accepted that it was not legally possible for us to transit through Australia," Nicol said.

"We were disappointed but had done all we could."

But on Sunday morning (Peru time), just hours before the charter flight was to depart they received an email from Chimu saying they could have boarded the flight after all.

"I feel it is my duty to let you know personally that it has come to our attention that LATAM do now intend to operate a flight between Sydney and Auckland on Tuesday," the email read.

"When we made the decision to cancel New Zealanders from the repatriation flight this was not the information we had available to us."

Meanwhile, their hostel continued to empty all around them as citizens returned to their home countries.

"Four Australians from our hostel are on that flight," Nicol said.

"The German government has taken their citizens home, along with 27 Israelis - their governments worked together to help their people leave.

"I said goodbye to our Irish and English friends from the hostel this morning.

"The UK government has paid to take their citizens home.

"The Dutch people here are packing their bags awaiting a flight that departs in the next two days, and the Americans are leaving as more flights take them home each day. 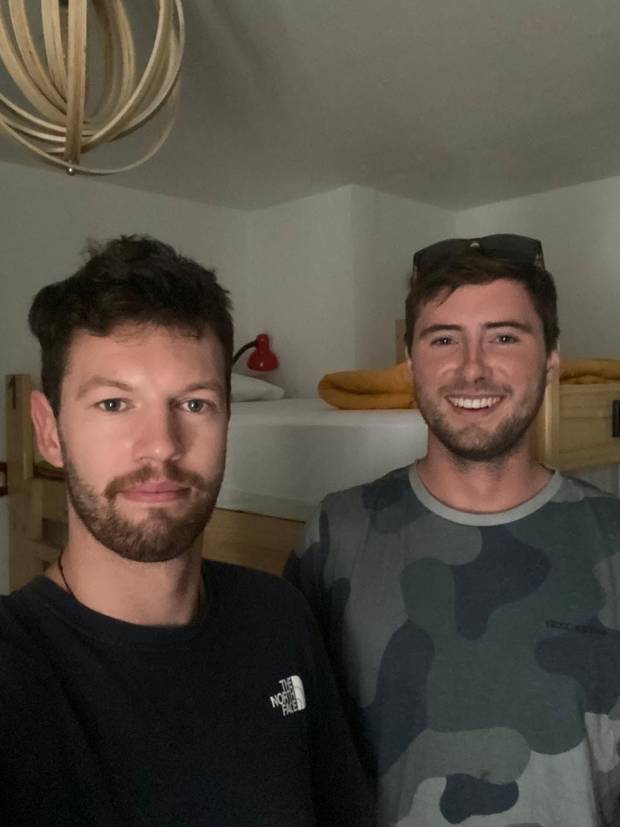 Caleb Nicol (left) and Conor Hayes are both stuck in a hostel in Lima, Peru, due to a Covid-19 lockdown. Photo: Supplied
The last email from Mfat told them "Government-assisted flights cannot be relied on to get you home. Hunker down and borrow money", said Nicol.

"While I 'hunker down', hostels throughout Lima are being raided by military and police.

"Hostels are being shut down and the remaining tourists are scrambling to try and find new accommodation where they can feel safe and stay healthy.

"The people in these hostels have been told they cannot leave their dorm room for up to three months.

"Their hostels are being guarded by the police and they have been told they will be put in prison if they are caught attempting to leave the hostel.

Nicol said he didn't blame Chimu Adventures for the mix-up, which was going out of its way to assist them, but the New Zealand and Australian governments needed to work together to bring their citizens home.

"Our Government turns a blind eye to its citizens who are literally begging for their help. Other countries are getting their people back to where they belong. We deserve support and we deserve answers."

Chimu Adventures co-founder Chad Carey told the Herald it was a "very difficult situation" with information changing constantly and they made the call based on safety.

"Our travellers' safety is our first priority, including being concerned about the possibility of people being left stranded at the airport in Lima.

"In this case, what seemed to be fact on one day, changed the next, after the deadline had passed, as we are seeing this in many events and situations around the world."

"The Government is committed to helping New Zealanders overseas where we can. But the international situation is complex and changing quickly, and some things are out of our control. Assisted departure flights should not be relied upon to get home."