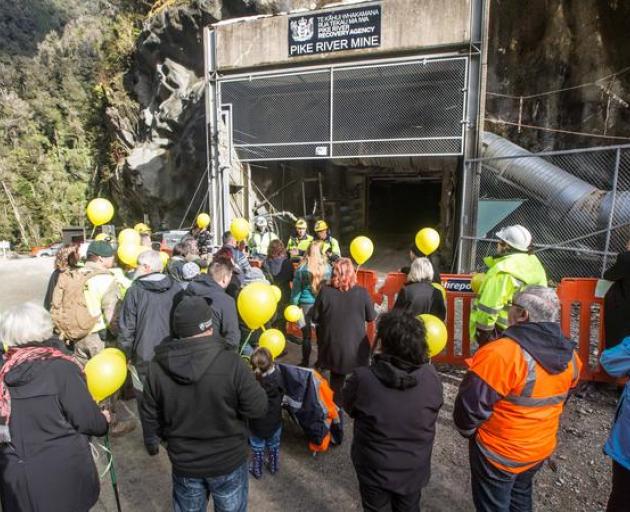 Families at the entrance to the mine for the re-entry in May 2019. Photo: Supplied / Pike River Recovery Agency
After two years of the Pike River mine re-entry — centimetre by centimetre — the families group has accepted there is no more money and hopes to move to the next stage, possible prosecution.

The $51million re-entry project with the specially formed Pike River Recovery Agency, began in May 2019.

The underground team has now reached the rockfall at the end of the drift (entry tunnel), which is as far as it can go.

Families accepted the re-entry would not go past the rockfall after talking to Minister for Pike River Recovery Andrew Little on Monday night.

"Families accept advice that going further would be a major, expensive engineering project, with complex potential safety risks, and it would be difficult to convince WorkSafe to give further exemption to mining licence," the group said in a statement after.

Agency chief executive Dave Gawn said his best estimate was they would be sealing the mine in September and handing the site over to the Department of Conservation in October.

While the families group, representing the majority of the 29 victims of the 2010 mine disaster, accepted it was literally the end of the tunnel for the re-entry, some were still lobbying to go beyond the rockfall.

Families group spokeswoman Anna Osborne started the recovery process with a blockade of the mine access road five years ago, preventing the mine from being permanently sealed.

Mrs Osborne said ideally she would like to see the underground team go further, but things got "very technical from the rockfall on".

As a result of the 2010 disaster, all underground mines in New Zealand now require a second way out (egress). Until now, the recovery agency has just been exploring a tunnel but if it were to go beyond that, it would be into the mine and therefore need a second, multimillion-dollar egress.

Mrs Osborne said going further was not even just about the money, as they would also need a whole new set of technical reports, risk assessments and WorkSafe NZ approvals.

"I always said I wanted to bring [husband] Milton home. That was when there was no hope of going into the mine at all, and I couldn’t bear that they were going to seal up the drift and have no justice. The evidence would have been buried as well."

She said the deal reached with the Government was to go as far as the rockfall.

With new police boreholes planned, she hoped police would get the evidence they needed. People had also come forward to assist the police investigation, she said.

There were no assurances of a new prosecution, but "I like to hope".

An earlier prosecution by WorkSafe was dropped, but the Supreme Court later ruled that decision was unlawful.

Bernie Monk has been pushing for the recovery team to go further and get to the ventilation fan, as he firmly believes the fan sparked the deadly explosion.

"We’re 9m away from the fan. We’ve spent all that money to get there."

Mr Monk said the investigation was one of the biggest homicide cases in New Zealand.

He had more information about the disaster, but could not release it all in case it prejudiced any possible court or police case.

The loader driven by Daniel Rockhouse at the time of the explosion was removed last week, the agency said.