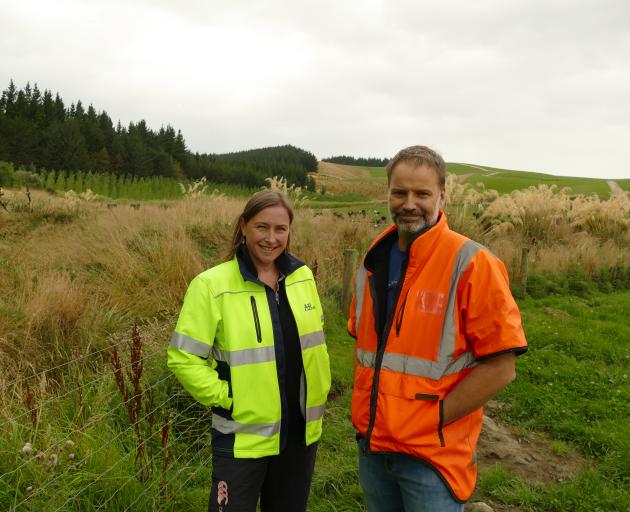 AB Lime environmental manager Fiona Smith with general manager Steve Smith in front of one of the parts of the farm being rehabilitated and set aside for conservation purposes. Photo: Ken Muir
Faced with a surplus of land around its limeworks and landfill operations, AB Lime has decided to turn to dairying as a way of best using that land.

''We believed dairying offered us the best opportunity for a good return so four and a-half years ago we did a dairy conversion on the farm,'' AB Lime general manager Steve Smith said.

''From the start our aim was to 'do dairying well', with a focus on animal welfare, sound milk production and good environmental practices.''

Because of monitoring requirements associated with the consents for AB Lime's other operations, water management was a focus from the start.

''We found other things in the water besides phosphate and nitrogen, including E. coli from a variety of sources,'' environmental manager Fiona Smith said.

''This came from birds and septic tanks as well as other places.''

She said that while her environmental team uses testing as a tool, they also carefully monitor the life and biology of the streams and wetlands on the property.

They have worked with Land and Water Science's Dr Clint Rissmann to provide a detailed understanding of where water is coming from and where it was moving to, either across the surface of the land or via drains.

''The challenge is to control and slow the movement of water and allow as much of the sediment to remain within the confines of the property,'' Mrs Smith said.

''We have carried out detailed aerial mapping of the farm to a high degree of definition to produce a detailed contour map.''

She said this has allowed them to identify not only water flows but where water congregates.

''Besides allowing us to work out places for mitigation structures, it has also allowed us to identify areas which should be taken out of production,'' she said.

''Often these are not the most productive parts of the farm and so far we've identified around 25ha which we think we can retire without compromising production.''

The plan is to allow much of this land to be returned to native bush and Mrs Smith said that in the long term there are plans for walking tracks and other activities.

Mr Smith said that part of the process is learning about the land and the natural flows and ponding places on the farm.

''In some cases drainage and other surface changes have forced water away from places where it naturally gravitated towards and our mitigation processes could help restore these,'' he said.

Climate change and greenhouse gas emissions are other things that have to be taken into account.

''Our recent extreme weather events which we haven't really had to deal with before mean we have to take extra care,'' Mr Smith said.

''This is especially important as many of the worst run-off issues can occur during these events.''

AB Lime's dairy farm covers 376ha with around 850 cows, mainly of Friesian extraction but Mr Smith said there has been a move to smaller animals more suited to the mixed landscape which includes some hill country.

The farming system is pasture-based with some supplementary feed. Mr Smith said they are fully grass and silage and winter the cows off on another property which makes them a mix of System 2 and System 3 farming.