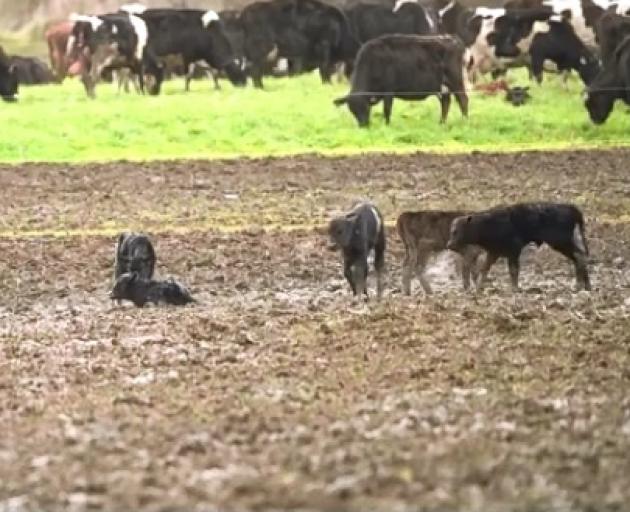 A screenshot of the video of the Super Farm. Photo: Geoff Reid NZ via NZME.

The NZ Superannuation Fund says it will not stop investing in dairy farms that use winter crop grazing, as a video supporting a petition to Finance Minister Grant Robertson circulates on social media.

The video by New Zealand environmentalist Geoff Reid shows a paddock turned to mud on a Southland farm owned by the Super Fund in which cows have just calved and a calf collection is under way.

The ground conditions the cows have calved in, and the calf handling, has raised the ire of more than 5500 signatories to the petition, which calls on Robertson to stop investing any of the fund in farms that are winter crop grazing, to sell any properties that continue the practice, and for fund-owned properties to find sustainable alternatives immediately.

A statement from the fund in response to Herald inquiries confirmed the paddock videoed was on a farm owned by the Super Fund. The video had been provided to the fund and to its farm investment manager FarmRight.

"We take our responsibilities as guardians of the land very seriously.

"As a long-term responsible investor we expect our farms to meet best and market-leading standards. Some of the calf handling shown in the video is below the standard expected by the Super Fund and FarmRight and does not reflect how staff are trained to manage stock."

On receiving the video, believed to have been filmed on August 10, FarmRight had immediately started an investigation with the contractor involved, the statement said.

It had also provided the video to the Ministry for Primary Industries/DairyNZ animal welfare team.

The Super Fund had also asked an independent veterinarian to review the incident and the fund's broader on-farm practices.

MPI/DairyNZ had decided no further action was required at this stage, the statement said. The vet report would go to the welfare team.

FarmRight chief executive Jim Lee told the Herald the calf handling had been "unacceptable and dealt with". He said there had been "an employment sanction".

He declined to elaborate and would not name the contractor "because it's a very emotive debate - on both sides".

Lee said for him, the animal handling and the winter grazing were separate issues.

A Super Fund spokesman said the fund would not stop investing in farms that practised winter crop grazing.

The Reid video and petition is new fuel for growing public concern about the practice of winter crop grazing, particularly in dairying stronghold Southland, where environmentalists have recently produced images of dairy cows knee deep in mud, unable to lie down and rest, and calving in deep mud.

Agriculture Minister Damien O'Connor has branded the images unacceptable and formed a taskforce of vets, industry leaders and officials to identify the issues and bring him some solutions.

Winter crop grazing is deemed necessary in some parts of the country to provide enough feed for stock at a time when there is not a lot of pasture.

Done well, it provides animals with quality feed to keep them warm over winter.

Done badly, it meant cattle could be knee deep in mud which gave rise to ''completely justifiable concerns'' for their welfare, O'Connor said in a statement last month.

FarmRight's Lee said the taskforce and O'Connor had been invited to inspect any FarmRight-managed operations.

He said in Southland winter grazing on crops was common.

However, the Reid video was of a paddock that had been grass.

The video had been filmed in the morning after overnight rain. In the background were dairy cows in good condition that had been shifted that morning to the next grass break, he said. The calves that remained were being collected for transport to calf rearing sheds.

They would be kept as replacements for the herd or sold to beef farmers.

The cows had been in that particular paddock for 24 hours before they were shifted, he said. Winter grazing spells could be 12 or 24 hours.

The fund statement said winter crop grazing was "an important practice that allows us to maintain stock levels, within an overall environmental envelope".

Lee objected to the Herald's use of "quagmire" to describe the paddock. He said the depth of the mud would meet the requirements of the Government's new freshwater policy recommendations, announced this week.

Online petition organiser and videographer Geoff Reid said winter crop grazing "is one of the most unethical choices the superannuation fund has ever made".

He claimed it caused freshwater pollution with nitrate leaches into groundwater aquifiers, and caused animal suffering and soil degradation.

The Super Fund statement said all its farms met or exceeded industry and/or regulatory standards and were subject to year-long farm environment plans and nutrient budgets that governed how winter crop grazing impacted on the environment.

The fund worked closely with Environment Southland on farm management.

A fund spokesman noted some images of Geoff Reid's Facebook page were not Super Fund.