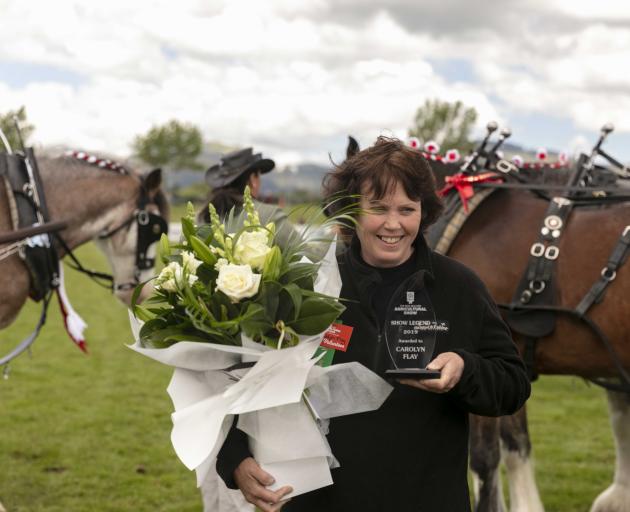 The Canterbury dairy farmer was named Show Legend at last month’s New Zealand Agricultural Show for her efforts in running the dairy cattle section over the past 15 years.

‘‘It was a total shock. I don’t really like the limelight,’’ Mrs Flay said of her unexpected honour.

Mrs Flay has been dairy farming all of her life, having grown up on a small dairy farm in the Waikato.

She and husband Keith farmed at Ohoka, near Rangiora, for 16 years with their three daughters, before moving to Dunsandel 18 months ago, where they milk 260 mostly Holstein cows.

‘‘I quite like it — it’s very rewarding and challenging and all of those things.

‘‘It’s what I always wanted to do and it’s a good lifestyle to bring up kids.’’

While their daughters were growing up, the Flays regularly entered in the Canterbury A&P Show. A personal highlight for Mrs Flay was winning all breeds champion yearling heifer ‘‘when we were just starting out at showing’’.

‘‘We haven’t entered in the last couple of years. It takes a lot of preparation work in the weeks before the show with extra feeding and breaking them in, and we haven’t had the extra help at home since the girls have grown up and left home.’’

But Mrs Flay was thankful for the loyal support of exhibitors such as the Sherriff family, of Ohoka, her former neighbour Peter Hansen and the Geddes family, of Tai Tapu, near Lincoln, in helping to keep the dairy cattle section running in the wake of the Mycoplasma bovis outbreak.

She said there was ‘‘a fabulous turnout of young people’’ for the stock judging competition on the Friday at last month’s show, with around 20 competing.

‘‘It was quite good to have them and it’s good for confidence building because they have to speak about why they placed the animals the way they have.

‘‘And it’s quite cool seeing the kids coming up through the ranks from the calf club up to sharemilking.’’

‘‘They are a great bunch of people to work with at the Canterbury show and all of the office staff are great, which makes it so enjoyable.’’