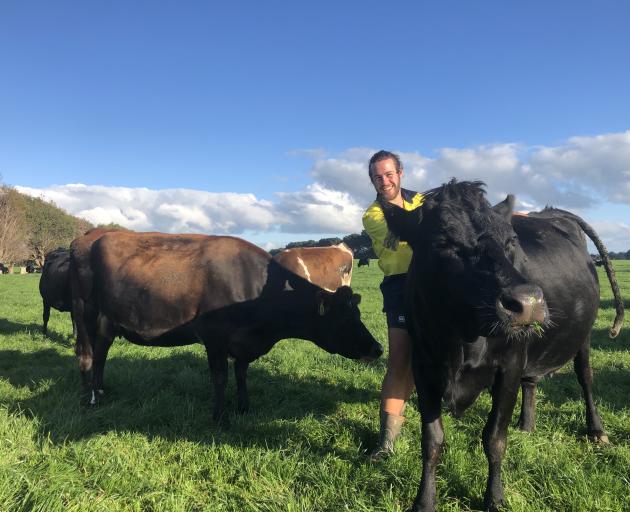 Best workmates... Jakeb Lawson enjoys working as a farm assistant on a Woodlands dairy farm and is progressing to become a 2IC next season. PHOTO: SUPPLIED
Jakeb Lawson has been working in the dairy industry since he was about 13 and likes it so much, he wants to eventually own his own farm.

Mr Lawson (19) is a farm assistant for sharemilker Matt McKenzie, on a 300ha property owned by Eoin and Jayne McKenzie, at Woodlands.

‘‘I got the opportunity to do some work for my brother-in-law when I was about 13 or 14 and I really enjoyed it,’’ Mr Lawson said.

‘‘When I was 16 I started relief milking for a year. Ever since then I have wanted to be a farmer.’’

He has been in the industry fulltime for about 18 months and has enjoyed it so much he is to become a 2IC for the McKenzies next season.

‘‘There are plenty of opportunities in the industry. It is not the easiest job, but it is a rewarding one.

‘‘I like working outdoors and a lot of my job is really practical, and I really like to work with animals.’’

Earlier this year he placed second in the Southland/Otago Dairy Trainee of the Year competition, the second time he has entered.

He wanted to step outside his comfort zone.

‘‘The first time I entered I had only been on the farm for four months. My boss encouraged me to enter as he had done it before. I thought it was a good opportunity to network with other people and learn from them, and gain experience,’’ he said.

‘‘My boss is pretty good, really supportive, and the other workers on the farm are experienced so I learned heaps from them.’’

While he is keen to enter the competition again, he might leave it for a year and re-enter the following year.

‘‘I might enter the Farm Manager of the Year competition later. I want to give it my best shot.’’

He would be happy to talk to anyone wanting to find more out about dairying.

‘‘I am always happy to have a yarn.