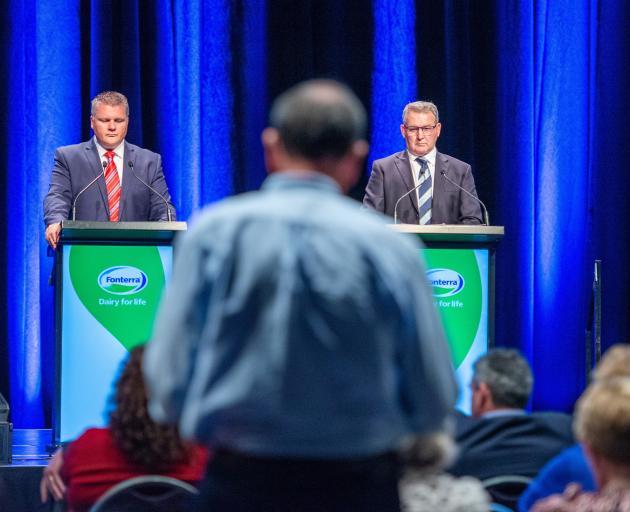 Addressing yesterday's annual meeting, Mr Monaghan said the 2019 financial year was a year of significant challenges and change within the co-operative, as it continued to fundamentally change its culture and strategy.

It was another tough year of significant change for farmers which included the Government's policy announcements on climate change and freshwater, the effect the Reserve Bank's proposal to tighten capital reserve rules had on banks' willingness to lend, and the response to Mycoplasma bovis.

Fonterra's decision not to pay a dividend and significantly impair a number of assets was a surprise to many farmer shareholders.

"I understand and share the frustration that you rightfully feel. We are well aware of the impact that our decisions have had on our share price and the balance sheets of us as owners even if the share price has started to show some signs of recovery", Mr Monaghan said.

Impairments were not made lightly; once made, most could not be fully reversed. But they were the right decisions, he said.

The board's decision not to pay a dividend for the past financial year was part of its stated intention to reduce the co-operative's debt.

Fonterra always knew it was going to be a tough year and should be pleased with the progress made.

"That sounds strange for a year in which we made a record loss of more than $600million. But it's real. I'm confident that when we look back at 2019 a few years from now, it will be to mark the beginning of another period of success for our co-op."

The co-operative was "not broken". The milk price was consistently on par with its peers in Europe and the US, Fonterra had a $4billion revenue business in China and now accounted for 40% of dairy imports into mainland China.

It had built a $2billion food service business from "pretty much scratch" in less than five years.

"The co-op wasn't broken. But it did need to change. We needed to take the best things from the past and adapt them for the future. The second lesson we took was that we needed to do more listening."

"When we listened to our farmers, unit holders, customers, partners and other stakeholders, they told us that they wanted to be part of our co-op, but that we needed to show up differently. I hope you've seen that change in the way we communicate with you."

Fonterra had set a target to reduce debt by $800million. Its average capital expenditure for the past six years had been more than $1billion. This year it was $600million.

It had reduced its global headcount by more than 1400 people, frozen salaries for employees earning more than $100,000 and decided not to pay performance bonuses for the financial year.

A portfolio review was "not a fire sale". It identified assets and partnerships that were either no longer core to its strategy, or had run their course.

It was now considering its options for its ownership of its China Farms, Dairy Partners Americas which was its joint venture in Brazil, and had begun the process of selling down its 18.8% shareholding in Beingmate.

Chief executive Miles Hurrell was "feeling positive" about the changes made over the past year and was comfortable the co-operative was well placed to meet its commitments.

Looking to FY20, Fonterra was forecasting this to be its fourth year of milk prices over $6.

Its earnings forecast of 15c-25c per share for FY20 was built on a forecast ebit range of $700million-$800million.

While that was down on last year, its forecast earnings per share was up, reflecting lower interest and tax.

Fonterra had four key priorities for the year ahead: to build a winning team by introducing and shifting to a new customer-led operating model to support its new strategy, which would include three regional chief executives; support regional New Zealand by injecting a further $10billion into rural communities through competitive milk price payments; reduce its environmental footprint, working with farmers so a further 1000 farms had a farm environment plan and prepare emission profile reports for all; and to improve energy efficiency at its manufacturing sites.

To hit its financial targets, it would improve its debt position so it was no more than 3.75 times its earnings, down from 4.3; reduce capital expenditure to no more than $500million, which was down $100million on last year; achieve a gross margin of more than $3billion; and meet its earnings guidance of 15c-25c per share.