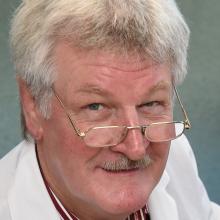 Frank Griffin
It will not be possible to control Mycoplasma bovis if an eradication attempt fails, given the present lack of understanding of the infection and the "gross inadequacy" of existing diagnostics, Emeritus Prof Frank Griffin says.

Otago-based Prof Griffin, whose career has focused on animal health research, described that as the "sad reality".

He believed the Government’s decision to attempt eradication first was the correct one, even though it brought considerable public liability for taxpayer funding.

"With proper consideration and planning, we could effectively eradicate the infection and simultaneously develop diagnostic tools for future control of this infection," Prof Griffin said.

Instead of the Ministry for Primary Industries "rushing headlong" to eradicate cohorts of animals considered to be "at risk" and a liability for infection, they should instead be considered an asset.

If managed appropriately, that would allow for the patterns of disease to be studied longitudinally and the development of new diagnostic platforms that would allow better control or eradication of the disease in the future.

"Instead of indiscriminate slaughter of all ‘at risk’ animals, selected cohorts of these animals should be sampled and studied exhaustively, prior to slaughter, to develop more accurate diagnostics for infection in the future, should there be other incursions of M. bovis.

"Contractual arrangements could be made with farmers to ensure that they are adequately rewarded for maintaining cohorts of infected animals. Let’s make haste, slowly and thoroughly," he said.

Eradication or control would be achieved only if there was a spirit of collaboration, rather than the increasingly adversarial attitudes gaining ground between the MPI and farmers. Future debate and planning must occur within a circle of collaboration, not blame, he said.

Agriculture and Biosecurity Minister Damien O’Connor yesterday announced the Government would spend $30million over two years on scientific research in support of the fight against the disease.

Prof Griffin questioned whether there would be any place for his Invermay-based research team, Disease Research Ltd, in that research.

In a statement, Mr O’Connor said all available domestic and international scientific expertise would continue to be called on to track and eradicate the disease.

The announcement came as another two North Island farms were confirmed as infected, bringing the total current number of known infected properties to 38.

A sheep and beef farm near Hastings and a dairy farm near Cambridge were discovered by the tracing of animal movements from previously known infected farms.