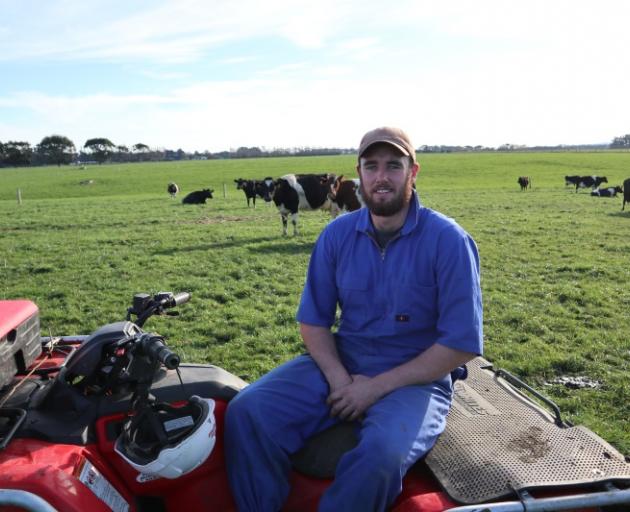 At 22, Mr Cochrane has wanted to be a dairy farmer for as long as he can remember.

He is in his first season as a 2IC for contract milkers Ben Franklin and Chelsea Saywell, on Roddy MacInnes’ 140ha property at Ryal Bush, milking 520 cows.

However, next season he moves to a 600-cow property in Oamaru as a contract milker.

He entered this year’s Southland/Otago Dairy Trainee of the Year competition and placed third.

His family were on a dairy farm near Rotorua and moved to Southland in 2007, when he was 10.

‘‘I grew up dairy farming and I have always had a passion for the cows.

‘‘Cows are some of the most amazing animals, and each cow has a personality.

‘‘You get to work with them, and see their habits and characteristics, and that is such a huge part of the job.

‘‘There is something special about waking up early, no matter what the weather, then getting the cows in and doing early morning milking,’’ Mr Cochrane said.

He had always helped out on the family farm and then went to Lincoln University for three years for a BCom(Ag).

‘‘I graduated in May and went travelling overseas for three months before starting this job.’’

However, while he was away he realised how much he missed being on a farm.

‘‘I want to be able to be someone who can carry the industry forward into the future.’’

He was looking forward to taking on his new role, which included employing staff, providing two farm bikes, and paying a share of the shed expenses as well as getting paid a percentage of the milk solids on a per kilogram basis.

‘‘It is a bit nerve-racking and exciting at the same time.

‘‘I decided to go in the deep end and see how it goes.

‘‘I feel a bit young to be employing staff.

‘‘I want to be a good boss who leads by example, hopefully.

‘‘It is a really good opportunity and the farm owners are really supportive.’’

One of his employees would be an 18-year-old with little farming experience.

‘‘But he is keen to learn and that is half the battle.

‘‘Hopefully he will tell his mates and word gets out and other young ones want to give it [dairying] a go.’’

Contract milking was a lower risk way to get into farm ownership.

‘‘That is the reason why I am going contract milking as if I don’t start now it is only going to get harder to reach my ultimate goal.

‘‘That is always on my mind, the driving force.’’

He urged people who had lost their jobs in other sectors to consider entering the dairy industry.

‘‘The opportunities are pretty endless.

‘‘You have got to accept you have to get up early and sometimes do long hours, but it is a pretty rewarding job,’’ he said.

‘‘Many employers are supportive and want to see their staff progress and do well.