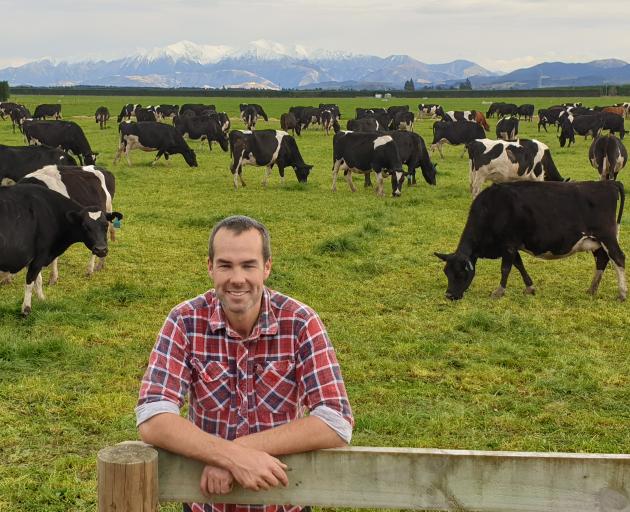 Federated Farmers North Canterbury president Cameron Henderson is enjoying the mild winter, but is wary of what may lie ahead. Photo: Supplied
The mild winter means milk supplies will be flowing later this season.

''Early in the season we don't really supply a lot, but we normally like to be supplying milk by the 1st of August, but that certainly won't be happening this year.

''Quite a few farmers are saying it's delayed, so whether it's the weather or cows are less stressed, but it's probably a good thing.''

Mr Henderson said he was supplying milk by July 27 last year, but there was no reason to be concerned at this stage. There was plenty of feed around, conditions were mild and the cows were happy.

The recent rain had been a welcome boost to dry paddocks and the region's aquifers, he said.

''We knew it was going to balance out at some stage. It was getting very dry and warm as well. Usually, we would be getting some snow and a southerly by now.

''The groundwater is a bit of a concern, so the rain can bugger off now; we need some sun.''

Mr Henderson said he was cautiously optimistic about the season ahead, as a late winter could be just around the corner, hitting farmers with snow and ice during peak calving.

While the ''on-farm stuff'' was going well, it was the off-farm implications around the environment and climate change that were causing farmers the biggest headaches.

''But if the target becomes a popularity contest and it doesn't make a lot of difference, we could be incurring a lot of costs for no real benefit.

''Most farmers say, 'give us the options and tell us the goals and we can get on and do it'. We are the industry which is going to be hardest hit, so we have a vested interest to fix it.''