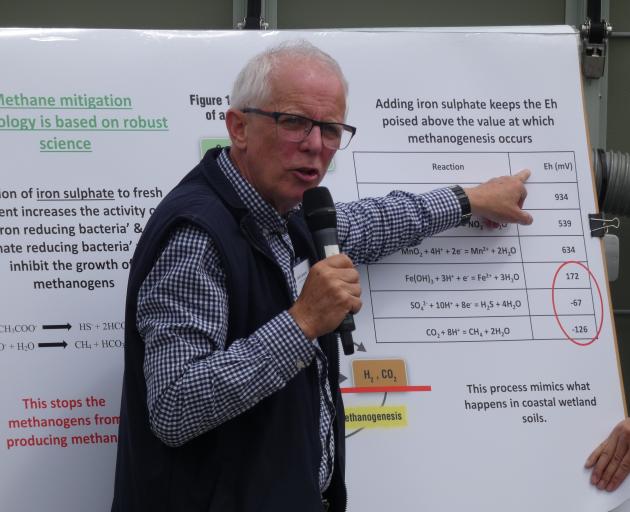 An additive normally used for treating drinking water is piped into ponds in an EcoPond system, which is claimed to virtually eliminate the greenhouse gas.

Developed by the university and fertiliser co-operative Ravensdown, it is being released commercially.

Effluent ponds are the second-largest source of methane emissions on farms.

Ravensdown says the system could cut total farm methane emissions by 4% to 5% on an average dairy farm of about 400 cows.

The additive — iron sulphate — goes into ponds via a computer-controlled pump and mixing system.

Prof Keith Cameron said this was one of the natural-based solutions that had been raised in talks at the COP26 climate conference in Glasgow.

‘‘There is a lot of interest and enthusiasm to try and find solutions to greenhouse gas emissions by looking closer to nature to reduce these gases. Well, EcoPond is a nature-based solution.’’

He said the effect of iron sulphate could be seen in coastal wetlands where there were lower emissions of methane.

Sulphates in the saltwater stimulate bacteria that steals the food source from micro-organisms that would have produced methane.

Prof Cameron said EcoPond mimics this and farmers now had a new tool to help them reduce their greenhouse gas emissions.

“The larger the pond, the more micro-organisms in the pond to generate methane. This new system has been tested in the lab and at farm scale, where it proves enormously effective at essentially nullifying the methane-creating process.”

The system also reduces phosphate loss to water and strips out E.coli so that the dairy effluent is safer to irrigate to pasture.

Ravensdown innovation and strategy manager Mike Manning said this would help farmers with working towards New Zealand’s target of reducing methane from livestock by 10% by 2030.

Chairman John Henderson said the co-op probably wasn’t going to make a lot of money out of Eco-Pond, but it would help farmer shareholders improve their environmental footprint.

He said more environmental initiatives were in the pipeline.

The unit is expected to sell for between $45,000 to $49,000, with one order in already before commercial production starts early next year.

The new system follows the development of the co-op's nitrification inhibitor, Eco-n, which was voluntarily withdrawn from shelves after traces of dicyandiamide were found in dairy products in 2013.

Prof Cameron said they were still deeply involved in finding alternatives to reduce nitrates in farm soils and farmers should ‘‘watch this space’’ for new developments.