Being solutions-focused key part of role 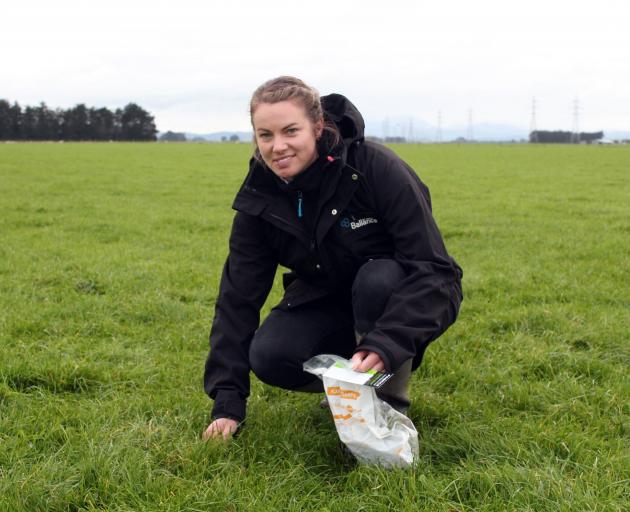 Growing up on a sheep, beef and cropping farm in Mid Canterbury, she was always out on the farm with her siblings.

At school, while she was interested in agriculture, the topic was never really pushed as a career which was disappointing, she said.

Originally, Ms Copland hoped to get into rural banking and she completed a BComAg, majoring in rural valuation at Lincoln University.

She enjoyed her three years at Lincoln, saying it was amazing how much easier it was to learn when you were interested in the subject.

She hated English at school but would happily read a textbook when it was about something she was interested in.

Ms Copland particularly enjoyed plant science and, after graduating, she worked at Midlands Seeds for a year in the office doing the logistics for the oilseed side of the business.

In August, 2014, she moved to Southland to join Ballance Agri-Nutrients, initially as a nutrients specialist in the Otautau, Nightcaps and Drummond area.

That involved looking after up to about 200 clients, being the ‘‘go-to’’ person for farmers — it involved soil testing, working with farmers on their farm goals to ensure their fertiliser plan matched what they wanted to achieve, and helping or pointing them in the right direction with any issues they might have.

It had been great for her confidence as when she moved to Southland, she probably knew about three people.

Fortunately, during her university summer holidays she spent two summers on a farm at Te Anau.

‘‘That’s why I wasn’t scared to come down here. I knew it was pretty friendly.’’

Earlier this year, Ms Copland changed roles to a key accounts position — there are three women in Otago-Southland who look after corporate and larger clients, spread throughout the two regions.

While it had been a lot to get her head around, the new role was the next step when it came to her career experience, she said.

Ms Copland works from home — she recently bought a house in Winton — and is very much immersed in Southland life.

She plays netball and is a keen baker, sometimes producing baking for the Rural Support Trust for those in need.

She is secretary for the Pourakino Catchment Conservation Trust, a group formed in 2014 by a group of like-minded farmers who decided it was time to work together to preserve the native bush, rivers and streams surrounding their farms while preserving their farming businesses.

In her previous role, that was part of the area she covered. Being involved means she keeps up to date with what is happening at Environment Southland.

And she also enjoys seeing the collaboration between farmers — whether dairy or sheep — and being very solutions-focused.

Clients in that area, not even involved at committee level, had a much greater understanding of the rules, she said.

In a way, it had been a little sad changing jobs within Ballance; she had received many messages from clients wanting her to carry on.

It was a very rewarding career and she had no regrets about the path she had pursued. Ballance was a company that ‘‘really look after you’’ and she was well settled in the South.

Asked whether she had any advice for young people keen on a career in the rural sector, Ms Copland encouraged them to head out with rural professionals.

‘‘I wish when I was at school I had gone out with reps that came to Mum and Dad’s. They’re all willing to take you.

‘‘People would offer, I never took it up. You don’t know what a job is until you actually see it first-hand,’’ she said.