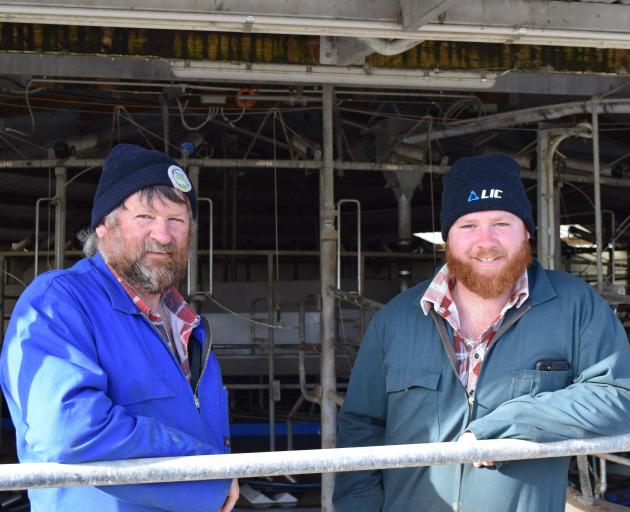 Dairy farmers Tony Brock (left) and his son, Cameron, are 50:50 sharemilking in Kaitangata. PHOTO: SHAWN MCAVINUE
The 25-year history of a family sharemilking on the same South Otago property is set to continue and grow.

Dairy farmers Tony and Sarah Brock are providing a pathway for their son, Cameron (22), to take over their 50:50 sharemilking operation in Kaitangata.

Tony started in the dairy industry, aged 25, about 30 years ago. He worked ‘‘as the boy’’ for a year on a dairy farm in Paretai, about 10km north of Kaka Point. A contract manager role followed on a Mataura Island dairy farm for two years. The Brocks started 50:50 sharemilking, running about 180 cows for Phillip Wilson on the Taieri for three years.

The farm has been owned by the Robinson family since the early 1900s. A strong relationship with the Robinsons was a reason why they had stayed sharemilking on the property. Sharemilkers traditionally do not stay for so long, moving on to equity management positions or farm ownership.

Tony and Sarah once put in a tender to buy a neighbouring farm but missed out by $100,000. The farm was now worth more than twice the price it sold for. Farm ownership would have allowed for ‘‘more meat in the sandwich’’ for the operation. 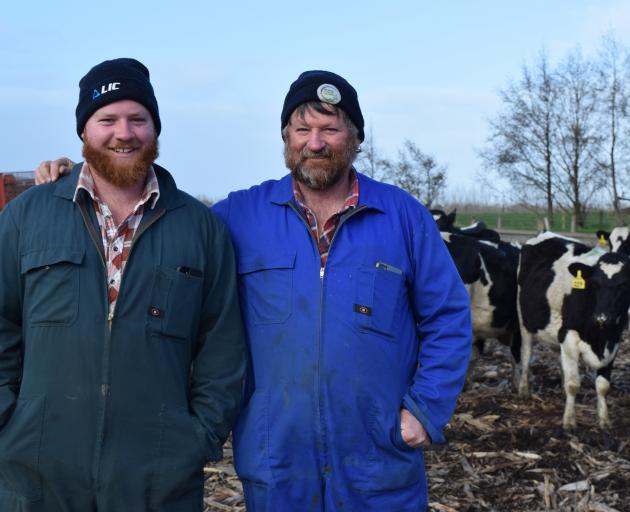 ‘‘They’ve got a nice temperament in the shed and produce nice milk,’’

Working on the farm to fundraise to be part of a First XV squad touring Canada sparked an interest in the sector.

At St Peter's College in Gore, Cameron started a Gateway programme, working a day a week on a dairy farm in Waipahi.

His first full-time job was working for Waipahi farm manager James Matheson for about two years.

‘‘They were good teachers — that’s when I started enjoying it.’’

A farm manager job became available at home nearly three years ago when his father decided to step back and work less. ‘‘I’ve become a helper more than a worker’’, Tony said.

Mrs Brock continues to do the bookwork, including the wages, GST and accounts.

Cameron said he and his dad work well together.

‘‘Dad’s happy to let me give things a go and changes things if it’s not too drastic.’’

Two people could run the farm with the help of two casual staff in spring. Automation made it possible for one person to milk the cows.

The plan was for the cows to begin wearing Allflex collars this year, which would make running the farm easier and improve the mating and health of the herd.

Since Cameron started they had lowered the stocking rate and increased production by bringing in more feed, including grain and palm kernel, Tony said.

The herd produced 480kg of milksolids per cow, up from 370kgMS per cow about five years ago.

The goal was to hit 500kgMS per cow this year, Cameron said

. A challenge of farming in Kaitangata was that the flat land could flood. Surface flooding could stay for 10 days, slowing grass growth and impacting on production.

Cameron’s mid-term goal was to raise the capital required to buy the herd from his parents and take over the sharemilking contract.

His long term goal was farm ownership. Tony said farm ownership was becoming harder but he hoped he was helping his son move towards it.

“I have no doubt he would have done it on his own anyway,” Tony says.