Lorna Buttono one of her favourite cows, Anglo Lheros Nina. She holds a photograph of herself aged 5 showing Nina at the Otago-Taieri A and P Show. PHOTO: BUTTON FAMILY

Miss Button (17) reckoned she was probably 4 or 5 when she first wielded a halter and lead, and paraded around the ring.

In fact, there were photographs from when she was young, showing her holding her charge's head "right up high'' and it was right above her head, she said.

This year, a highlight for the South Otago teenager was winning the intermediate-senior handler (14-18 years) class at the New Zealand Dairy Event, held at Manfeild Park, near Palmerston North.

It was "pretty cool'' to have won a handler class there when she was 12 and then go back and repeat it a few years later, she said.

The Button family are familiar figures on the showing circuit in the South and are passionate advocates for A and P shows and getting young people involved.

Miss Button's parents, Tim and Katy Button, established their Anglo Holstein Friesian stud in 2000 while they were sharemilking near Morton Mains in Southland.

They were interested in cows and breeding and it was a way of getting what they were doing recognised. 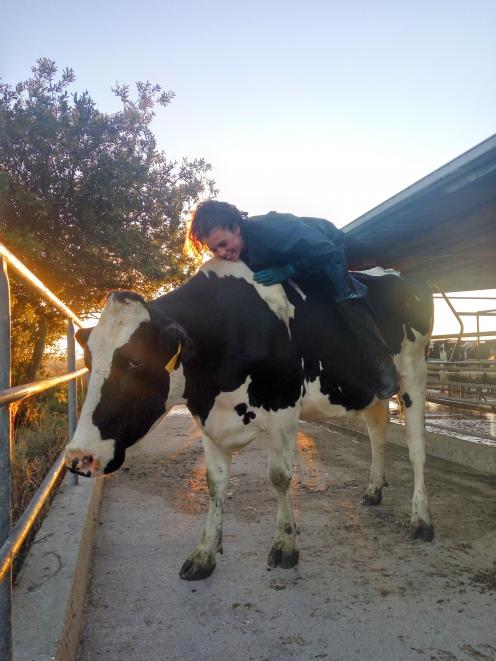 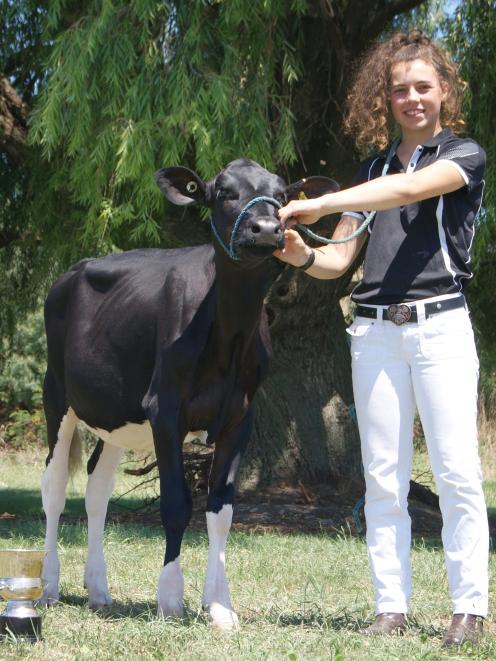 Originally from the UK, the couple - who came from a sheep and beef background - moved to New Zealand in 1996, ostensibly for a year. They now farm at Port Molyneux.

Miss Button, who completed her studies at South Otago High School last year, admitted she just loved being with cows.

She has won various prizes over the years, including the Arapeta Trophy at the Holstein Friesian New Zealand awards for the junior Black and White youth member who earned the most points in the all-New Zealand calf class competition.

She did the show preparation herself, including clipping, saying her father "gave me some tips and said, 'just do it'.'' She has also taught other youngsters some tips on leading cattle.

The key she reckoned was " just being natural and relaxed and enjoying it''. But you also had to be on the ball and show off the animal to the judge, and that started outside the ring, she said.

Preparation was very important, including shampooing and conditioning, and she laughed that they did not have a hairdryer in their home - it was in the shed for use on the cattle.

They have Holstein-Friesian and Ayrshire cattle, along with a few beef cattle, including Speckle Park, and Miss Button has been involved in the Future Beef competition at Beef Expo.

She said two cows in the stud were her own, after she won them as calves.

Friesians were her favourite breed while she had her own favourite cow called Min, which she could lie beside in the paddock. One day she even managed to jump on to her back.

Competing at the NZDE at Manfeild was a "pretty big'' deal given she had mostly shown in the South. At Balclutha, there might be between two and five - sometimes a few more - in handler classes, but at the NZDE she was competing in a class of 25.

During the week, she helped out the Landell stud and showed one of its calves, and a heifer in the handler class.

"She was a bit hard to handle at first but she got the hang of it and behaved for me. It was a very big class,'' she said.

Miss Button recently headed to the Isle of Man for an outdoor adventure guiding course and hopes to do some exhibiting while over there. Her family had lots of contacts in the UK.

After completing the course, she would have qualifications useful for outdoor adventure guiding, a pastime "really big'' in New Zealand.