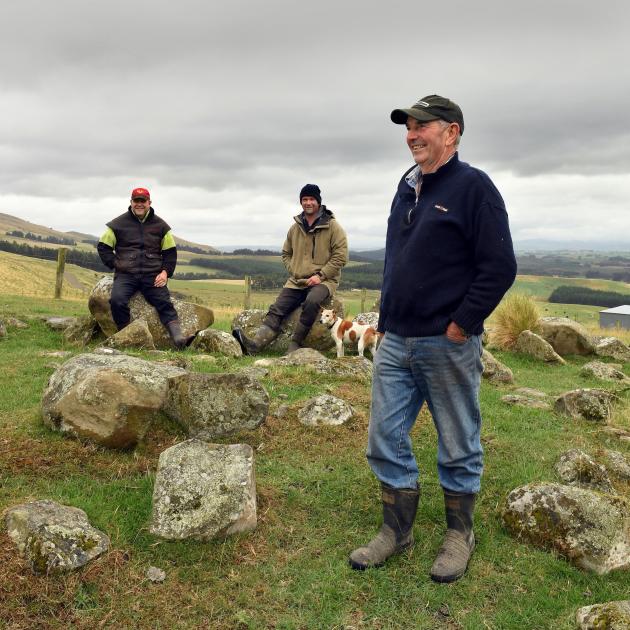 Colin (front), Scott and Ryan McKenzie at home on the farm at Clinton. PHOTOS: STEPHEN JAQUIERY

When it comes to thinking outside the square, it would be hard to look past the innovative McKenzie family from Clinton.

Colin McKenzie jokes they have a lot of junk around, but they are incredibly clever at turning that "junk'' into all sorts of machinery.

As well as running a large sheep and beef operation, they also do their own forest harvesting, utilising some of their own home-made technology.

The 809ha property is home to three generations of the McKenzie family: Colin and Elaine, sons Scott and Ryan, with their respective wives Jo and Jennel, and their children.

Colin and Elaine's daughters, Melanie Cupit and Janelle Te Raki, both also work in the agricultural sector, Melanie for Mainland Minerals and Janelle for Ravensdown. 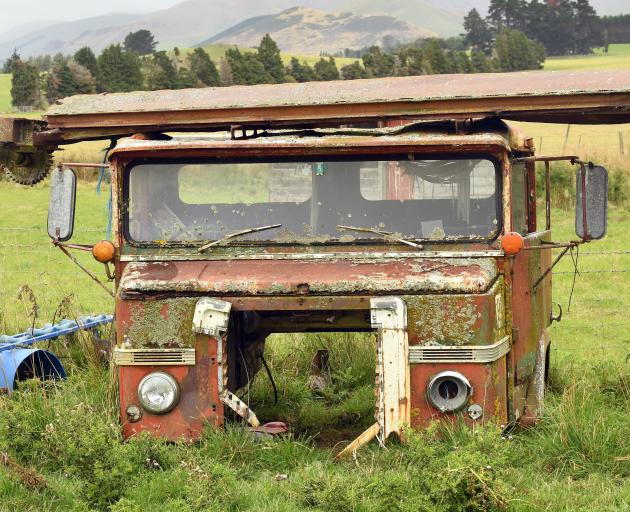 While the cab of this old truck sits in the paddock, its rear end is still in use as a working trailer.

The original home farm was bought by Colin's grandfather, possibly around 1919, and Scott and Ryan are the fourth-generation to farm there.

The property - which has expanded considerably over the years - is now made up of 350ha of flat to rolling land, 283ha of hill and 176ha of forest.

The trees were predominantly pine and there were also Douglas fir, macrocarpa and gum, along with some small amenity and native plantings. The property has shelter belts and the family also has a stake in the Cone forest.

Members of the McKenzie family do almost all of their own work, including logging, although they do use silviculture and shearing contractors.

A field day on the property on March 23 is an opportunity to show people what they are doing and have a look around.

Colin McKenzie had planned to be a plumber but was told he "better get home here'' and returned to the family farm. At that stage, it was only about 160ha and the forestry was limited to shelter belts.

When Colin and a friend planted 80ha of forestry, they had trouble getting it planted as the council said they should not plant trees.

Mr Stephens and his fellow farm forestry friends were all extremely supportive and, from there, the McKenzie family's interest in forestry grew.

Colin was a traditional sheep and beef farmer, taking over a good farm from his father.

"The sheep were good, land was good, everything was good and I knew it pretty much inside out,'' he said.

But then it got a "bit boring'' and he felt like he needed to do something else. Options included either converting to dairying or planting some trees.

He chose the latter and had enjoyed watching the trees grow, along with mixing with like-minded people, while the benefits of the plantings - including shelter for livestock - were "huge''. 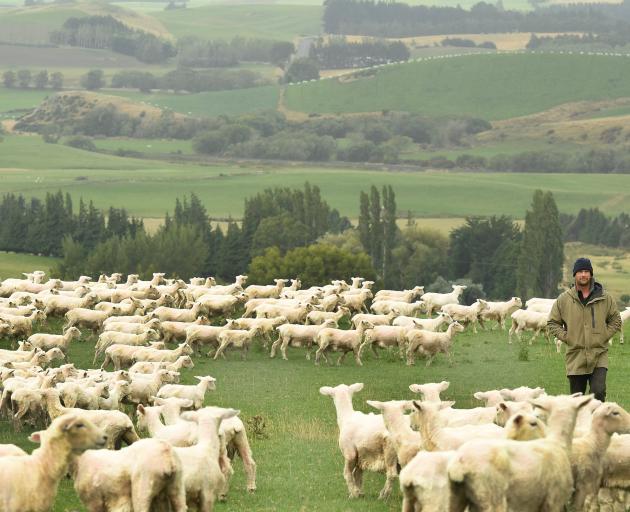 Both Scott and Ryan had travelled overseas quite extensively and worked abroad. It was always good to come home, Scott said, and he always wanted to eventually return to the farm.

He was in Canada shearing when a nearby property came on the market. Colin - who had already purchased additional ground - did not particularly want any more land but he wanted two paddocks to link the property up.

Asked how it worked out, they joked that every week they were supposed to have a meeting. That had started out "pretty good'' but had waned.

Colin was acutely aware that it was not always easy when fathers and sons were working together and communication was crucial.

Ryan, and Scott's wife, Jo looked after the stock work, while Scott did most of the tractor work and machinery-related stuff.

"I don't answer to anybody. If they want me, they come and find me,'' Colin quipped. 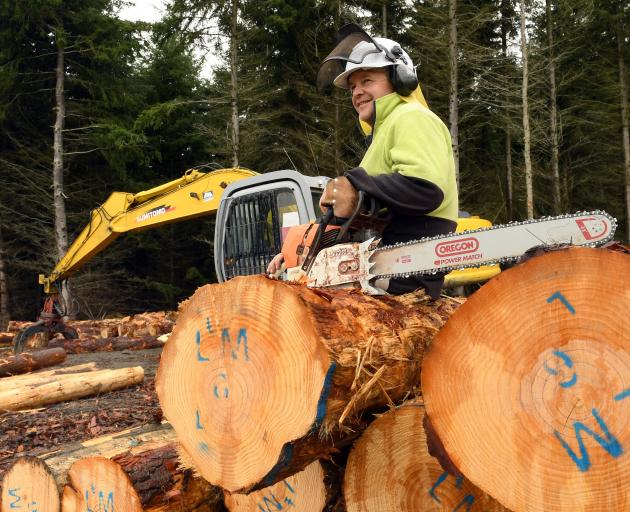 Scott McKenzie with his tools of his trade at his logging skidder site.

Coincidentally, it was originally a town supply farm and Colin also used to milk six cows, which he joked he did to remind him that he did not want to milk cows.

The family remained passionate about sheep and beef farming, despite there having been plenty of opportunities to go dairying.

Colin and Scott were particularly mechanical and enjoyed engineering-related tasks. They had built their own firewood processor, and a log-forwarding trailer.

Colin invented the McKenzie side-pinning for capless wool packs which had made a major impact on the shearing industry in New Zealand.

They had "always worked with junk'' - "something someone else has thrown out, whether a tractor, plough or whatever'', Scott said.

He reckoned that probably dated back to his grandfather's day when they never had any money and so built things.

The passion for wood continued indoors. All three McKenzie homes are heated by wood-fired boilers, which were "bloody magic things'', Colin said, and they all had warm houses. 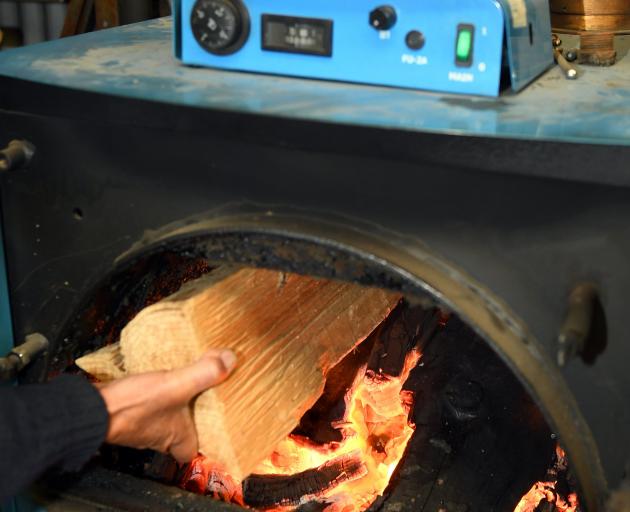 When Scott started to get a little bored, they decided they would have a go doing their own logging, instead of buying more ground.

They acknowledged it was quite unusual and there would not be many other farming families embarking on such a venture.

It gave him something to focus on and there was continual training - he was collecting NZQA standards all the time.

One of the most important things was the friends they had in the industry. If anything got "too hard'', there was always a phone number they could call.

It required thinking all the time and it was something that Scott enjoyed, being focused on what he was doing.

It was a dangerous industry to enter into, but they had "huge'' support from other logging gangs, farm foresters and WorkSafe.

When they started, Scott helped a mate in a logging crew near Gore for a few months and started getting his ticket.

They kept it small-scale and simple on the farm. Some "hard-out'' logging gangs could produce in a day what they did in a year, Colin said.

There were huge opportunities with forestry, but the key was to not over-capitalise, something which was easy to do, Scott said.

"It gives you something to get out of bed for in the morning. You go away up there and sweat your bum off. I quite enjoy it,'' he said.

His equipment was fairly basic: digger, skidder, chainsaw, and they made a road-line and logged as they went.

A log forwarding trailer would cost about $100,000; Scott built one for probably under $5000 - that involved a lot of study and dreaming.

As for the firewood processor, it would probably cost even more than that, and they built it for about $10,000. 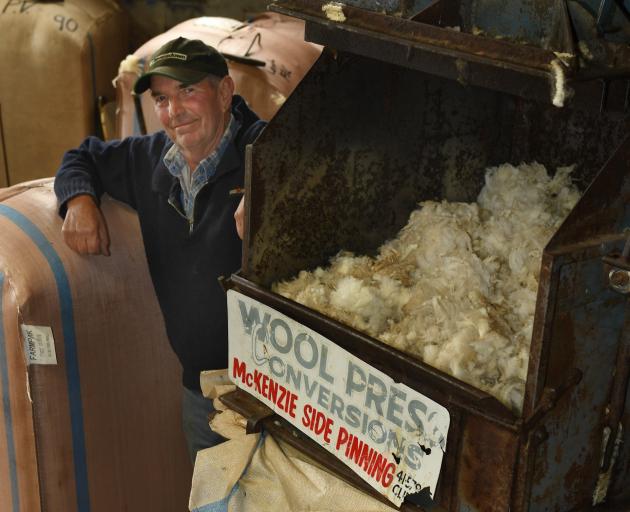 Colin McKenzie with one of his early pinned wool presses. He invented the McKenzie side-pinning for capless wool packs.

Asked if he had any advice for farmers contemplating planting trees or getting into farm forestry, Scott said the best advice he heard was "the best time to plant a tree was yesterday''.

It was "pretty cool'' to watch the trees grow then cut them down, load the truck and then replant the area, he said.

Colin and Scott's combined contribution to the South Otago branch of the New Zealand Farm Forestry Association was more than 30 years, and Scott was the current secretary.

Outside of forestry, the family has had a strong community involvement with various organisations and groups.

Ploughing was a passion for Scott, a two-times national ploughing champion who has competed internationally.

He got that interest from his uncle, Ray McKenzie, from Winton - not from his father, who admitted he only ploughed one plot when he was about 16 and "made such a bloody mess'' he could not get out of it quick enough.

Scott found it a good mental challenge, while he also enjoyed the engineering side of it. The sport was all about precision and perfection.

He likened it to shearing sheep, saying "it doesn't just happen in five minutes''.

This year's New Zealand championships were being held at Thornbury on April 14-15, with a trip to the world championships in the United States next year at stake.

The McKenzie family have used their home-made technology for their forestry operation.
Comment now