Bridget Henderson has been selected for a New Zealand Young Farmers exchange with the Scottish Association of Young Farmers. PHOTO: SUPPLIED

The skirl of the pipes is beckoning in June for Bridget Henderson.

Ms Henderson (25), a member of Waitane Young Farmers, is this year’s recipient of the New Zealand Young Farmers exchange with the Scottish Association of Young Farmers.

When she got the call, she ‘‘couldn’t believe it’’. She had always wanted to visit Scotland, which was where her family roots were and the Henderson family had hosted several young Scottish farmers on their Southland farm.

As part of the experience, she wouldattend theworld-renownedRoyal Highland Show inEdinburgh, Scotland’s largest annual agricultural show which dates back to 1822.

People commented there were strong similarities betweenthe agricultural sectors in the twocountries and she was hoping there might be some useful practices she could bring back to her family’s farm, which is 10 minutes’ drive out of Gore.

Henderson Dairy — Southland’s first registered raw milk provider — sold raw milk, in reusable glass bottles, to the public in a cabin at their gate and word of mouth was the biggest marketing tool. Ms Henderson’s mother also made regular deliveries to Gore and Mataura. 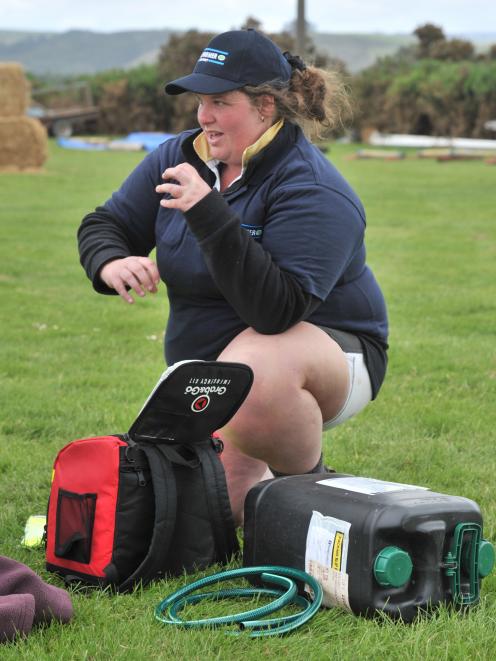 Bridget Henderson takes part in the first aid section in the Young Farmer of the Year district contest in Milton in 2014. Photo: Linda Robertson
The 280-cow herd was wintered on the 140ha farm and young stock was grazed on a support block 5km away.

She now worked at Farmlands in Gore, a job she loved — particularly the people she got to meet and the opportunity to broaden her knowledge. She also helped out on the family farm whenever needed and during busy periods such as calving.

Her involvement with Young Farmers began when she was at secondary school and she was part of the TeenAg club at Gore High School.

She was a member of the TeenAg team that won the Otago-Southland regional final in 2011 and competed at the grand final in Masterton which was an ‘‘amazing experience’’.

She was now a member of the Waitane Club and ‘‘absolutely loved’’ being part of that club. She had been chairwoman and had some liaison roles, including being liaison member for Otago Southland Junior Young Farmer and AgriKids.

She was keen to do as much as possible through Young Farmers, saying ‘‘you get so much out of it’’, and that included the likelihood of entering the FMG Young Farmer of the Year again.

She has previously entered district finals and she laughed that she had been told she needed to take the competition more seriously.

Her brother Steve represented Otago-Southland in the 2015 grand final and his family all enjoyed supporting him, she said.

Ms Henderson’s long-term goal was to become a technical field representative or independent farm consultant. She also wanted to get back into the dairy industry, saying it was ‘‘in our blood’’.