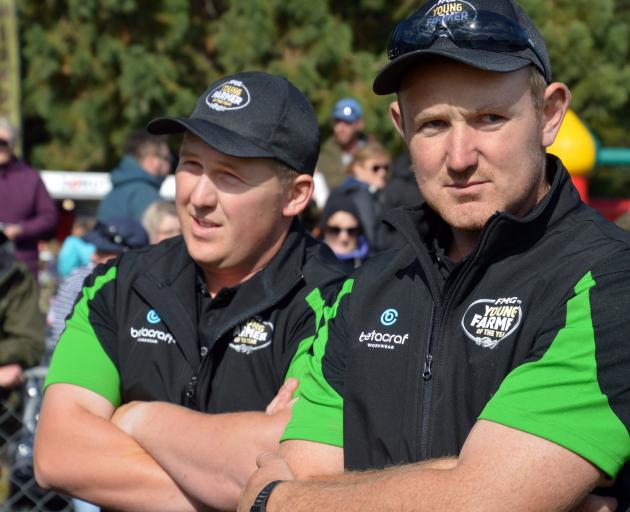 Alan Harvey grew up watching the Young Farmer of the Year contest on television and it was something he aspired to be part of.

In July, that ambition will come to fruition when he represents Aorangi in the FMG Young Farmer of the Year in Hawke’s Bay.

Mr Harvey (27) won the regional final in Oamaru on February 23. It was his fourth regional final, having previously competed in two in Otago-Southland and one in Tasman, and he was humbled by the strong support he had received.

He was looking forward to the grand final, while also conscious of the time and effort he was going to have to put in to prepare for it.

He had a broad range of experiences to draw on and it was a matter of trying to cover all bases as he prepared, he said.

Brought up on a sheep and beef farm in North Otago, Mr Harvey joined the Five Forks Young Farmers Club when he was 15 and was involved in setting up a club at Waitaki Boys’ High School.

He completed an agricultural science degree before taking up a graduate position with Agriseeds in Canterbury.

He held the record for being the youngest Federated Farmers arable chairman in the organisation’s history, chairing the North Canterbury section.

He then shifted to Central Otago, where he was an agronomist with Agriseeds — looking after the Otago-Southland area — and a member of the Upper Manuherikia Young Farmers Club.

His work was wide ranging — from farm mapping and drone flying to stock scanning. He was now moving to a new role as operations manager for North Otago-based Borst Holdings, which he described as an ‘‘awesome opportunity’’.

It was also nice to be back living at home on the family farm, and any spare time was spent there.

He was back as a member of Five Forks Young Farmers Club, his home club. Through his involvement with Young Farmers, he had met many ‘‘awesome’’ people, he said.

Mr Harvey had also worked on a high-yielding irrigated cotton farm in Hillston, inland New South Wales. The block he looked after was 400ha and part of a 1200ha cotton operation. He did cultivation and irrigation.

He also spent time helping with the grain harvest in Albury/ Wodonga on the border of New South Wales and Victoria, and also worked on a ranch in Colorado in the United States.

Otago-Southland will be represented by Matt McRae, who thought he better have another crack at the contest before he got too old.

That decision paid off for the 30-year-old Wyndham sheep and beef farmer who won the Otago-Southland regional final last month.

The past two grand finals have been won by Otago-Southland contestants: Logan Wallace last year and Nigel Woodhead in 2017.

Mr McRae acknowledged it would be ‘‘good to go three in a row’’ which he understood had only been done once before.

There was a southern connection between two of the other grand finalists: Mr Harvey competed in two Otago-Southland regional finals, and North Canterbury shepherd Georgie Lindsay — the first woman to win the Tasman regional final — grew up on a sheep, beef and deer farm at Dipton.

Mr McRae grew up on the property he now farms in a family operation, running 4200 ewes, 230 dairy heifers and 50 beef steers. He and wife Natalie have a young son, Jacob.

After graduating with a bachelor of commerce (agriculture) degree from Lincoln University, he worked as a rural banker in Southland for three years.

It gave him an opportunity to see a lot of different businesses and he learned a ‘‘huge’’ amount.

He has been a member of the Wyndham Young Farmers Club for about eight years and has served as chairman.

The contest was a good opportunity to test yourself and put yourself under pressure, and it also promoted agriculture in New Zealand in a positive light and encouraged people into the industry, he said.

Mr McRae was expecting plenty of Southern support in Hawke’s Bay — ‘‘a fair few’’ flights had been booked.

And the number of people who had already contacted him, offering help with his preparation, had been ‘‘pretty phenomenal’’.

Positive goal but difficult to achieve results to please all