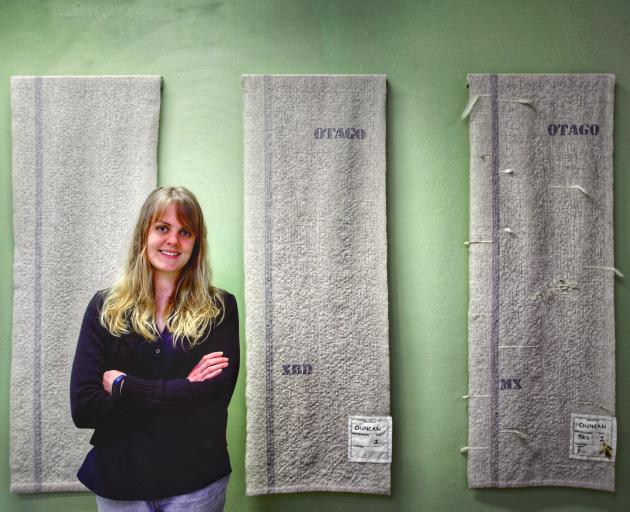 Fibre artist Hope Duncan is keen to promote the virtues of wool through her art. PHOTO: SUPPLIED

Hope Duncan sees art as a platform that can ‘‘speak to many’’.

The Dunedin woman, who has been working with wool in her art, is spreading the word about the virtues of crossbred wool.

Wool has been a constant in her life — from when she was a baby wearing clothes knitted by her grandmother — and she has a passion for the fibre.

A keen knitter and spinner, she studied occupational therapy with a view to working in rural communities.

Having worked on a dairy farm at the end of secondary school, she realised healthcare did not always reach rural communities.

After completing her degree, Ms Duncan decided she needed ‘‘a bit of a break’’ and wanted to explore the art side a little more, so she did a graduate diploma in art.

Within that, she got into textiles and discovered weaving, teaching herself to weave.

She started looking at the New Zealand wool industry, and how merino wool was ‘‘doing fantastic’’ but crossbred wool was not.

She got in touch with PGG Wrightson Wool South Island sales manager Dave Burridge and general manager Grant Edwards, keen to extend her understanding of wool and wanting to do something about the state of the industry.

They suggested the Certificate in Wool Technology course through distance learning which she is now about halfway through.

It includes block courses and she has learned about wool-handling, identifying different breeds of sheep, micron and yield.

Participants on the course also got their ‘‘P plates’’ for wool-classing, which she likened to the driving system.

Completing the course is giving her a much better knowledge of the industry she is trying to represent and that fed into a recent exhibition in Dunedin of two new works Dunedin entitled Golden Locks and the Three Fadges, and Careful Where You Tread!

Now Ms Duncan said she was talking to companies about the clothing they produced and extolling the virtues of using wool.

‘‘The more I’ve got to know about wool, the more it’s fed my passion for it . . . to the point I’m going and talking to big business and promoting wool. If I can do more things like that and work alongside farmers, I’d be pretty chuffed,’’ she said.

The arts community was an eclectic group and she had some interesting conversations with people, some of whom thought sheep had to be killed in order to harvest their wool.

They came away with a much better understanding of what actually did happen and of the benefits of wool and she was a strong believer in the ‘‘ripple effect’’.

‘‘The more people you talk to about stuff, the more they talk to other people. Just casual conversations on the street corner just get people thinking. The more you get people thinking, hopefully more action will be taken,’’ she said.

Last year, Ms Duncan won the Rembrandt fashion and textile section of the 2018 ECC NZ Student Craft and Design Awards, having been highly commended in the awards the previous year.

She described her winning entry, A Beautiful Deception, as a textural response and conversation about the hidden damages of the use of synthetics in the textiles industry.

Ms Duncan, who is having an exhibition later this year at Webb Farry, is completing an internship in weaving at The Loom Room. ‘‘I love it, I absolutely love it. I have to remind myself to stop for lunch.’’