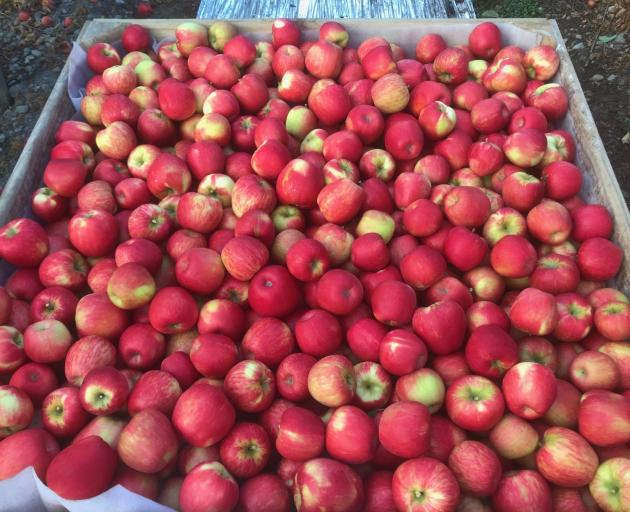 Red Martin, manager of MA Orchards at Levels near Temuka, said they had their best-ever season: 4200 tonnes of Honeycrisp apples harvested this year, well up on the previous year's 2300 tonnes.

Andrew Forward, manager of Waipopo Orchards at Seadown, just north of Timaru, said it had not been quite as successful for them due mainly to wet weather in November and December.

''The wet weather has been bad for us and has affected the final size on our reds although our Braeburns have been OK.

Fifty percent of what Waipopo grows on its 80ha orchards is of the Honeycrisp variety, which are transported to T&G Global in Nelson and packed for export to the United States.

The remainder are Royal Gala, Red Delicious and Braeburn varieties, which are destined for markets in Asia and Europe and packed at the orchard.

Packing of Royal Gala began at Waipopo this month, and harvesting of Red Delicious and Braeburn will probably begin in the third or fourth week of May.

Picking started in late February and finished at the beginning of this month.

They have 75ha in production. Once picked, the fruit is also trucked to Nelson and packed at T&G Global.

Most of the apples are for the American market but some will also be sent to Canada and several Asian countries.

''All orchards are now under transition to organics, with the first orchard set to gain status for the 2020 season,'' Mr Martin said.

They had a harvest crew of 230 pickers and a support crew of about 30 to 40 supervising.

Mr Forward said they had 14 permanent New Zealand staff, another seven New Zealand residents were casuals and the remainder were backpackers and RSE (Recognised Seasonal Employer) workers who can stay for a maximum of seven months.

''We've had two crews, the first arrived in late October-November and will go through to May.

''The second group arrived around February and will stay through the winter.''

Mr Forward said the RSEs were good workers and he had been in the original pilot of the scheme.

''A lot of Kiwis don't understand the money they earn is to pay for education for their children, the development of their village's water and to buy a lot of equipment for their plantations.

''It makes a hell of a difference to their lives.''

He said it was difficult finding New Zealanders to work in the orchards because the region had high levels of employment.