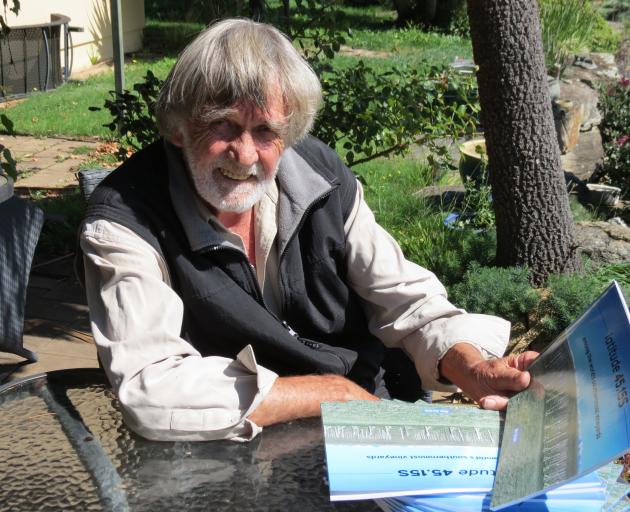 Author Ric Oram, of Alexandra, is soon to launch his new book, Latitude 45.15S - among the world's southernmost vineyards. Photo: Yvonne O'Hara.
It will be 30 years this year since the first modern-day wine made in the Alexandra basin was sold.

Bill Grant, of William Hill vineyard, and Verdun Burgess, of Black Ridge, sent their grapes to Rippon vineyard in Wanaka to be made into wine by Tony Bish.

Mr Oram also believes this year is possibly the 150th anniversary of the first wine made in Central Otago, in Clyde, using grapes grown by Frenchman Jean Feraud.

However, as nothing was documented on the planting and first vintage, it was just an estimate.

His latest book follows on from Pinot Pioneers, which was released in 2002, in which he profiled the people who planted grapes in Central Otago in the early days.

''I thought it was time to update the book, but there was no wine tasting - no liquid research - as I do for the ODT column.''

He started researching the book last year and visited every vineyard in the Alexandra basin.

''I also got quite a bit about Jean Feraud [who made the first wine] and James Bladier [who planted the first vines].''

Not too much was known about the two pioneers when he wrote his first book but Wayne Stark had since researched their history.

Mr Oram said he had also found out if Black Ridge had retained its title as the southernmost vineyard in the world.

He had started researching for a similar volume on the Cromwell basin. ''Now I have started, I can't stop.''

Readers can find out if Black Ridge retains its title when the book is released at the Clyde Wine and Food Harvest Festival on Easter Sunday, April 1.

The book will also be available from the Alexandra i-SITE or by emailing lojo.rico@gmail.com.