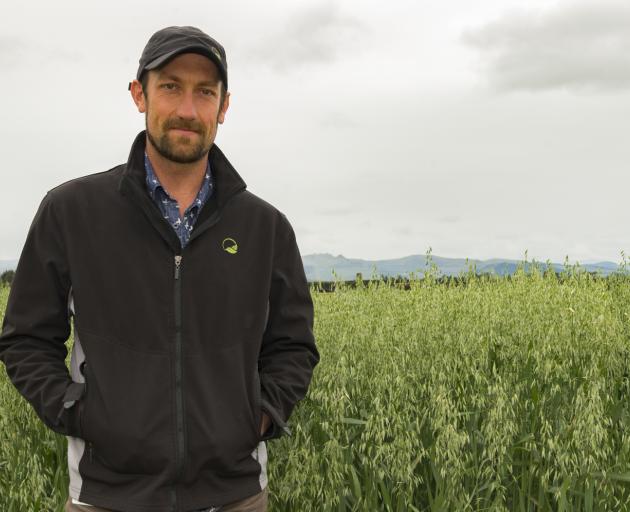 Similar trials were run last year on the Mossburn farm and another property near Gore.

Plant and Food Research scientist Dr Brendon Malcolm is hosting a field day for Environment Southland staff on November 7 on the dairy farm owned by Lucy and John van Vliet to look at outcomes.

A public field day will be held in December.

He said sowing a catch crop could reduce nitrogen leaching by up to 50%.

"Farmers who cultivated catch crops between the two main crops had the advantage of additional feed in their system, so it is a win-win."

He said he measured nitrogen capture levels on the sites, following the establishment of crops like oats, triticale and ryecorn, which were sown after kale or fodder beet crops were grazed, and before grass varieties or other summer crops were sown.

He said they were also comparing catch crops' effectiveness with fallow periods.

The study is two years into a three-year Sustainable Farming Fund-funded project, run by Lincoln Agritech in partnership with Plant and Food Research, Foundation for Arable Research, DairyNZ and other companies and agencies, which supply in kind support and additional funding.

Dr Malcolm said they had held trials on other farms in the southern regions, on both heavier and lighter soils and using direct drilling, fallow periods, and using conventional cultivation.

"Sowing catch crops in mid-winter was not without its challenges," he said.

"We have also been looking at kale and fodder beet to see if there are any differences establishing catch crops after those."

While crops in other areas could be sown earlier, the Mossburn crop were not sown until mid-August, while the Lumsden crop was sown in early July.

He said they needed to ensure the crops being sown could be established during the harsher, colder, wetter Southland environment.

"We have only got a short window of opportunity to get the crops in the ground.

"Both trials in Lumsden and Mossburn are looking pretty good."

One of the key elements of the Mossburn trial was the use of a Farmax Spader drill, imported by Mr and Mrs van Vliet, to provide a coarser, more effective cultivation and allow the soil to break up more naturally, which encourages faster crop establishment.

The Spader is designed to be used on wet paddocks after harvesting or cropping, and will also sow seeds, all in one pass.

Dr Malcolm said early results from all sites indicated if the catch crops could be sown as early as possible in winter, then the nitrogen uptake was more effective.