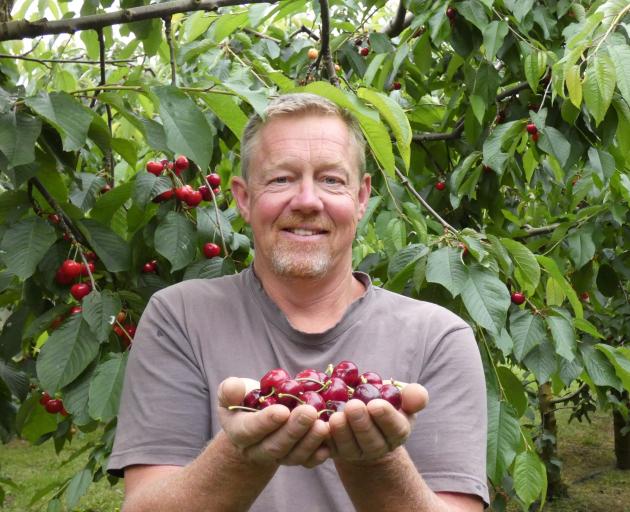 Cheeki Cherries/Dam Good Fruit owner Martin Milne holds some of this year’s harvest. He remains optimistic despite looming labour shortages in the industry. PHOTO: JARED MORGAN
Labour shortages are not going to dampen Martin Milne’s enthusiasm for cherry season as the harvest begins.

The canny Scottish expat has a trick up his sleeve when it comes to the harvest at Cheeki Cherries/Dam Good Fruit — pick your own or as as he terms it, "PYO".

He hoped to capitalise on increased domestic tourism to bring business his way.

The cherry season this year was looking "decent" at this stage but things could change.

"To be honest, you don’t know until you’ve got the money in the bank."

While he had his "PYO" sideline and also offered an online order service, he still faced many of the issues the horticulture sector had been presented with this season.

While he recognised there might not be enough hands to pick this year’s harvest and there could be "fighting" between orchards for seasonal workers, the industry was more or less resigned to it, he said.

His optimism is not shared by all in the industry as Covid-induced border closures mean the traditional workforce is not available.

The $50million horticulture and viticulture sectors in Central Otago face a massive shortage of workers with those roles traditionally filled by backpackers on working holiday visas and a backstop of recognised seasonal employer (RSE) workers.

Near Roxburgh, Remarkable Orchards owner Sid Birtles said he had a little more time before the cherry harvest began than his counterparts at the opposite end of Central Otago but the worker shortage issue was weighing heavily.

"It is looking pretty grim as far as the labour market goes.

"We have some backpackers, we have some RSE workers, but we are going to be massively short and the Government is doing [very little] about it."

He had 10ha planted with up to 10,000 cherry trees awaiting harvest and the crop was heavier this year than some previous seasons.

"I have other fruit like apricots coming on line at the same time as the cherries. We may be faced with dropping some crop on the ground and just focus on the more lucrative stuff like the cherries."