Fine weather for harvest, but spring toll on yields 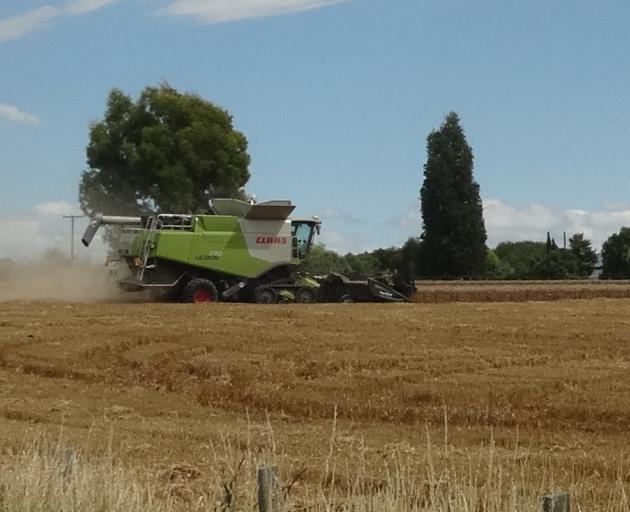 A harvester in action just south of Timaru. Photo: Chris Tobin
Arable farmers have been enjoying exceptional weather for harvesting.

''The weather so far has been brilliant and a reminder of what summer and harvesting used to be like,'' South Canterbury Federated Farmers arable chairman Jeremy Talbot said.

''After a very wet start to the grass-seed cutting, the weather came right for harvesting with most grass-seed harvesting done.''

He said from discussions he had held with growers some yields had been variable.

''But for those who kept up the fungicides, the results have been a good average.''

Harvesting weather has been great but yields have been variable. Photo: Chris Tobin
Crop yields had been affected by the extremely wet spring and lack of sunshine.

''Grain yields are down on average by about 20% with some higher screenings and lighter hectolitre weights.

''Peas have been very badly hit with most barely doing 50% of a normal year.

''The spring sown crops are at or near normal for cereals and brassicas.''

As far as prices were concerned, sellers believed prices should be firmer.

''Looking at supply issues and lower yields along with no spare grain in Australia, buyers think it should be going down and so currently there is a stand-off.

''Looking as impartial as I can, I think that grain feed selling for around $400+ in silo is a middle ground but milling wheats are needing to be in the $450+ in farm.''

Buyers thinking that prices were falling could be in for a surprise, Mr Talbot said.