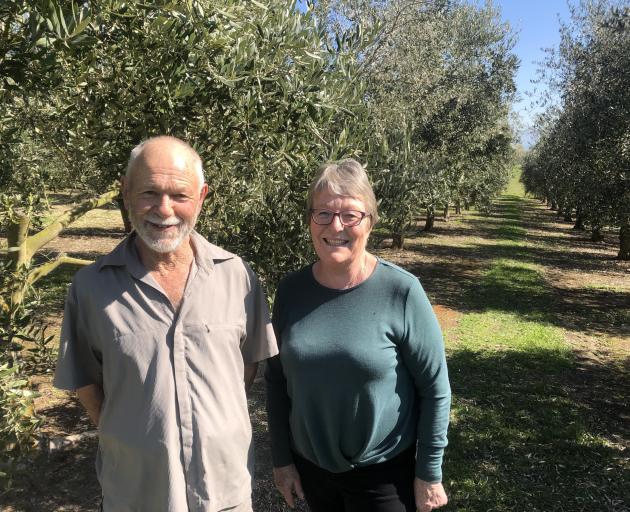 Formerly arable farmers, the Blakemores sold their original property in South Canterbury and sought a property in the South Island.

After looking at places in Nelson and Christchurch in 2001, they were sold when an agent suggested the couple look at a property just outside Pleasant Point.

"When we arrived and saw the view out to the Southern Alps it practically sold itself. In the past, each of our Airbnb guests stopped in the front yard for a little while to admire the scene," Mrs Blakemore said.

The first trees were planted in 2002, but nothing was harvested until 2008 when the couple hand-picked olives that produced close to 25 litres of oil.

Since then, they have had a harvest every year, barring two due to weather.

"The production has increased since the trees have got older, which allows us to be the most consistent olive grove in South Canterbury. There are other South Canterbury olive groves that have produced oil, one in Waimate and one just south of Timaru. But we have been able to regularly produce it thanks to an ideal site," Mr Blakemore said.

They have never had their fruit frosted or rejected due to frost, whereas fruit around Christchurch can suffer that.

"Because we have ours on a northwest facing slope, there are enough wind currents at night to keep the frost out of the grove," he said.

Since Covid-19 hit New Zealand, the growers have been surprised by the fact their business has, at local markets, nearly doubled in profit when compared to last year.

Their attendance at the Pleasant Point market in mid-September was the "very best as far as takings went.”

Mrs Blakemore believed the success came down to a push from the Government for people to support local produce and a break in international travel allowing families to have extra spending money.

"Being a local oil, people are looking for it. We took what we thought was enough to sell and Alan had to come home and get another box.

"We just sent four bottles over to the United States to a lady who bought some in February and wanted more.”

Covid-19 did not change their process of operation and, while they had a few cattle to fatten, their grove and garden ensured their time was well spent.

"Like everybody, life slowed down but we still had a few sales. In the last two years, we have put oil in the New Zealand Olive Awards and won a silver medal both years.

"We have put oil in this year and the judging is taking place around now. We would love to get a gold, silver is good but we are not sure about a bronze. It might feel like