Lifetime working with seeds and grains 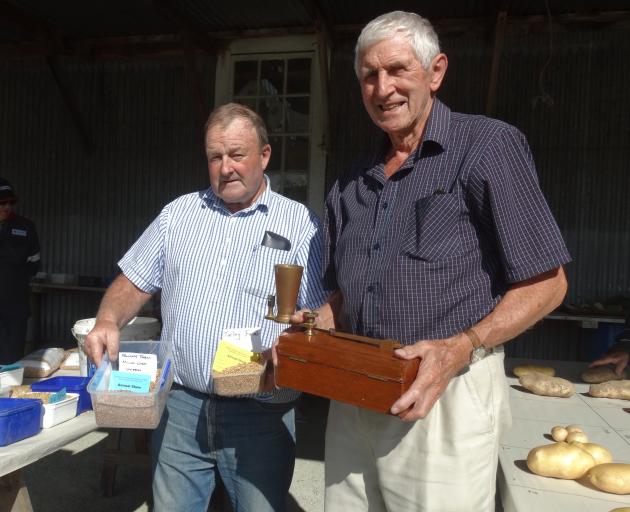 Lindsay Green (right), in the seeds shed with Temuka farmer Warren Stratford, at the recent Temuka and Geraldine A&P Show. Mr Green has been attending the show as a judge for more than 30 years. Photo: Chris Tobin
Lindsay Green, of Timaru, spent a lifetime working in the grain and seed industry, when there was great reliance on people's knowledge without the aid of technology.

''In the old days it was a bit hit-and-miss. You didn't have a meter [to assess the seed].

''It was done by biting it between your teeth or using a hammer.

''Today it's electronic, it spits out the information on a bit of paper. In my working life I was always chewing something in the way of grain.''

Mr Green (84) started in the industry straight from school in March 1953, working for the NZ Loan and Mercantile Company at Washdyke. He travelled each day to work from Temuka by bus.

''He dealt with the loan company for seed and so I got a job.''

After starting with daytime hours Mr Green went on to shift work.

''The job was very dusty and very labour-intensive. Everything was bagged and moved by trolleys with sack barrows and stacked manually with the assistance of calibrators.

''Every time you moved seed it caused dust.

''I've swallowed a lot of dust but it has not affected me.''

Mr Green worked as a labourer on machines until 1960 when he was made foreman.

''I had that job for 27 years in the same premises, until the company merged with Crown Corporation. In '87 we all moved down to the CFCA store at Washdyke. I retired there in early '97.''

''I had to learn about the machines and know how to talk to clients when they brought seed in and get the best out of staff.

''The industry changed from everything being bagged to things being done in bulk, which started in 1967.

''Farmers brought their seed in bulk trucks and we had to supply bulk facilities ... and put in silos.

''As more and more farmers were supplying seed, the cleaning machinery had to be upgraded. Overseas machinery was brought in or made here under licence

''They had more capacity for throughput and less labour content.

''The complex also had to be more clean and we had to eliminate the dust factor. You did the best you could to get purity; you looked for 99.9% purity.

''There were good farmers who would produce some good seed and some not so good.

''They dealt with me. We had to make sure the seed was good. If not it had to be dried. The farmers knew all that.

''Back in the 1950s farmers didn't have seeds contracted to sell; today you need a contract to produce a seed.''

There were challenges along the way.

''One client brought seed in 200 sacks; I told him to take it home and dump it.

''He and his father didn't know the difference between weed and a certain grass.

''Another time I refused to dress a line of seed in the store because it must have been through a flood; it had dried out quickly but had dust on it. I didn't want to dress that in our store.

''I think they're the only two times I refused.''

At the height of the harvesting season there were two 12-hour shifts, one starting at 6pm on a Sunday.

''I worked three eight-hour shifts; it involved all sorts of funny hours.''

And grain stores in the winter, were, he said, ''the coldest places on earth''.

''But we still had a fair amount of seed and still had to keep going, dressing grain.''

When he started, other big companies besides the NZ Loan and Mercantile dominated the industry, such as Dalgetys, CFCA, Pynes, Wright Stephenson and National Mortgage.

''It's gone from big companies to smaller companies. Years ago you also had the odd travelling seed cleaner who went around the countryside. They've disappeared now.''

By the time Mr Green retired he was working for Seedlands, which was owned by three local farmers.

There have been other changes as well.

''We've now got feed barley to supply all sorts of animals and it's in very high demand all the time.

''Barley straw is much in demand, as well, when once you burnt it.''

Mr Green retains his interest in the industry and was a judge at the recent Temuka and Geraldine A&P Show.