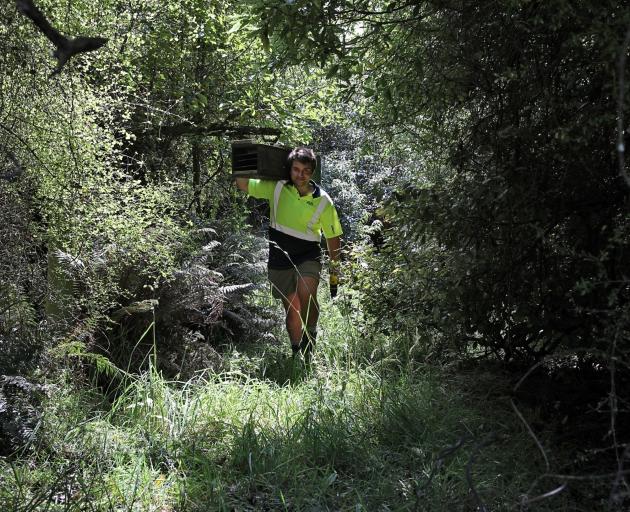 AB Lime conservation and biodiversity ranger Ollie Crawshaw has helped develop a native nursery and also looks after the company’s 70ha of native bush under restoration. PHOTO: ABLIME
Following some trial and error, plus a little experience, a new nursery programme beside a lime mining site at Browns, near Winton, has germinated about 10,000 native seedlings in its first year.

The 480ha AB Lime site also has a 950-cow, 380ha dairy farm, with a neighbouring 70ha of native bush, including 13ha of wetlands, under restoration.

AB Lime environmental field officer Ainsley Adams said the ultimate goal was to translocate kakariki and South Island robins back into the area.

People would be able to see the dairy farm, native bush and wetlands at a field day hosted by the Mid-Oreti Catchment Group on October 8.

"We want to showcase what we are doing."

AB Lime started buying in the thousands of native plants needed for the restoration project.

That proved expensive, and sometimes the plants were in short supply so it decided to establish its own nursery on site last year.

AB Lime part-time conservation and biodiversity ranger Ollie Crawshaw developed the nursery. He made a tunnel house and shade house to protect the plants from the elements, building everything from scratch.

He also carries out pest control.

"We started our nursery with little to no experience and with trial and error, grew our seedlings.

"We eco-sourced seed from about 18 different species from the block last year and most started to grow."

Once the nursery was well established the company hoped give plants to other catchment groups.

As part of the field day, it want to showcase a detainment bund and drainage system, which is part of its mitigation programme and which slows down run-off from the hill country.

"We would like to replant another 25ha of retired pasture to complement the bush block.

"We want to encourage others to implement similar projects on their own property."