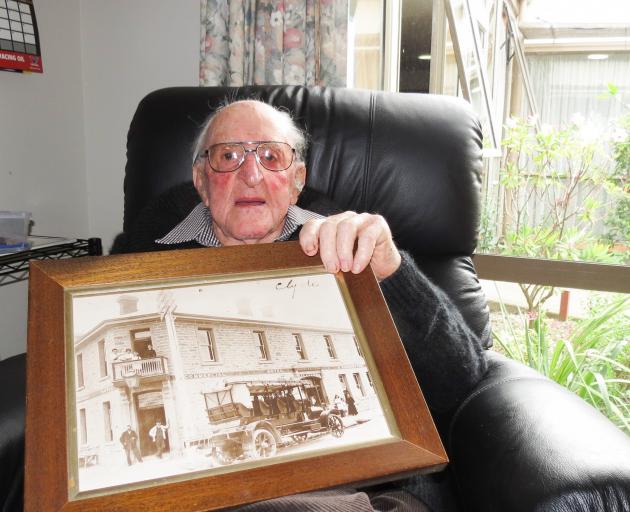 Desmond Paulin (96) has many yarns about the early days of orcharding, and the days his grandmother’s family owned Dunstan House, and later the Clyde Hotel. PHOTO: TRACIE BARRETT
A family that has left an indelible imprint on the fabric of Central Otago celebrated a century of harvesting summer fruit this year.

The Paulin family has been a stalwart of the orchard industry for generations.

Parties were held on two different orchards family members run, one well-established and the other newly planted, with a large packhouse opening above Clyde yesterday.

Robert Noel Paulin (known as Noel) bought the Excelsior orchard and a house the family fondly know as "The White House" just outside Clyde in 1921.

The property sits on the rise from the Clyde Bridge, on the corner of Earnscleugh Rd and what was named Paulin Rd when Mr Paulin diversified into land development.

Mr Paulin married Mary Larking, whose family then ran the Dunstan House hotel in Clyde, and the couple had five sons before Mr Paulin died in 1948, aged 54.

Three sons are still alive — Desmond and Frank, who live in Alexandra, and Brian, who lives in Wellington.

In the next generation, two grandsons of Noel Paulin, brothers Kevin and Raymond Paulin, own and run Clyde Orchards in Earnscleugh with their wives, Meg and Debbie.

Another grandson, Dennis Paulin, is co-owner of Dennys Orchard, also in Earnscleugh, and his younger brother, Tim Paulin, is operations manager for Fortune Fruit Co and manager and a shareholder of Three Kings Cherries.

Three Kings has 30ha of new orchards, another 10ha to be planted on the hill above the Clyde bypass and a large new packhouse on the property.

Tim Paulin hosted a centenary celebration in August together with a "roof shout" for the new packhouse, which is due to start operations tomorrow.

Kevin Paulin hosted a more formal event at his packhouse on November 20, holding a family gathering the following day at The White House, where his mother, Wilma, still lives.

He said his father, Peter, died eight years ago, and his uncle Gerald had also died.

The orchard had grown significantly since his grandfather bought the original 6ha and Clyde Orchards now cultivated about 90ha, he said.

Bernice Lepper, the eldest daughter and second-born of Peter and Wilma Paulin’s eight children, prepared a history of the family’s early days in the area for the centenary and said the family had grown up knowing their history "because our father was a great storyteller".

Those stories include her grandfather being injured at Gallipoli and sent to England to recuperate, where he went to visit his uncle, Sir William Paulin.

Family lore has it that Noel Paulin had turned up at the front entrance of the great house, only to be sent to the servants’ wing.

Noel Paulin’s son Desmond Paulin is also a great storyteller at 96, and said when his father went to meet Sir William, he was sternly spoken to for winking at a maid, something that was unheard of in the strictly class-conscious England of the time.

The family is proud of their history in the Central Otago orchards, but Kevin Paulin said he was unsure whether it would continue for another generation.

Ideally, it would be lovely to keep the business in the family, he said.