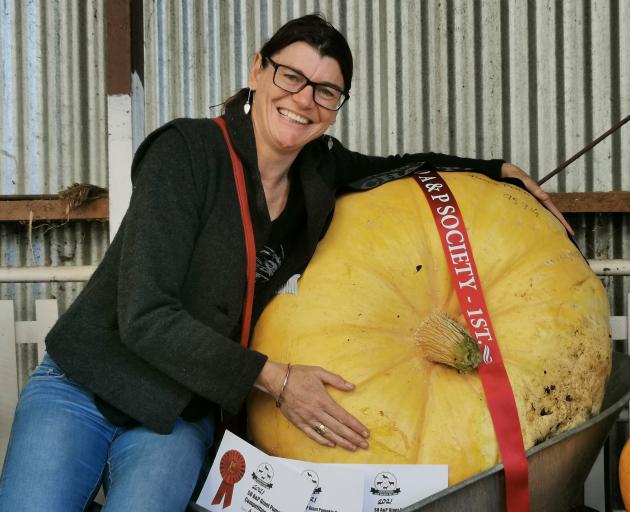 So, having produced a record-breaking pumpkin suits the Balclutha family to a T.

And it was prodigiously big. Weighing in at 95.5kg, Mrs Pettitt’s pumpkin was nearly three times heavier than the second place-getter’s 32kg. The previous record was held by a child entrant, Hamish Attwell in 2018 with a 70.5kg pumpkin.

On the morning of the recent competition, Mrs Pettitt and and her husband, Marcus, struggled to get it into the wheelbarrow to take it to the Balclutha showgrounds. Fortunately, they live practically next door.

The early childhood teacher had no idea why her pumpkin grew, and grew — and grew.

"I would say it was more by good luck than good management."

However, the daughter of retired farmer Graeme Greer, of Clifton, who is a South Otago A&P Society life member and organiser of the trade sites on show day each November, did stick to three key elements:

"Sun, water and good soil. But that’s all I’m telling you, I’m not giving away any secrets,’’ she joked, although she did concede giving them plenty of space to run was also important.

She has had two previous giant pumpkin competition attempts. One grew to 55kg and another to 70kg. That this one surpassed the others was a complete surprise.

"I got some poorly plants after the show (November South Otago A&P Show).

"In fact, I moaned and groaned to my husband all December (December was a really cold month) that they were going to die because they were so sickly. But then all of a sudden, at the end of January, they took off, and I felt so bad, ’cause I’d moaned and groaned so much, so obviously they’d taken pity on me."

She continued to nurse them along with plenty of rotted cow and horse manure and said a few prayers to the pumpkin gods. The growing season had not been without drama.

"The chickens scratch around it, and I thought they were going to peck it.

And then an escaped sheep had a go at my patch. That was four weeks out from the competition, and I said to that sheep, ‘You are not going to get my pumpkin!’"

In March there was a frost, which got one of the pumpkins and turned it into rotten mush. And then she was advised that in order to maximise the size of one pumpkin, she would need to cull a few others from the vine.

"The sacrifice! What if I had have chosen the wrong ones?" she remembered worrying.

Although she knew from her agricultural background and gardening course that good soil was paramount, it was enhanced by the growing conditions this year, she said.

"It was a very odd growing season, but I did learn a lot.

"It’s such a neat thing to do, to grow a pumpkin, for the whole community and especially children. I’ll be encouraging my kindergarten [Balclutha] to grow some for next year."

The irony of growing giant pumpkins was that they were not really edible, she said.

In fact, show secretary Katy Button’s pigs ended up with Mrs Pettitt’s pumpkin rather than it being kept for cooking.

"If you’re thinking they’ll be tasty, you’d be disappointed . They’re stringy. Though Katy did say you could slice through that one like butter.

‘‘All the growing is for the size not the taste, but Katy’s pigs are not disappointed."

The whole experience had been very inspirational. 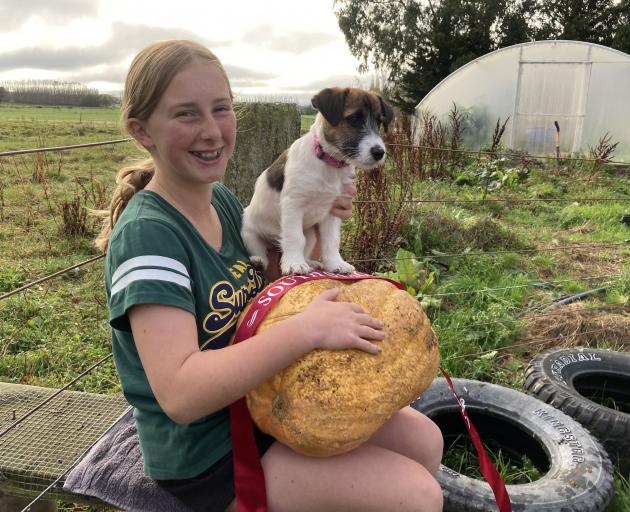 Brooklyn Smith (12), with her Jack Russell pup Indi, shows the pumpkin that won the children’s section at the South Otago A&P Show Giant Pumpkin Competition.PHOTO: MARY-JO TOHILL
Brooklyn Smith’s win in the children’s section of the South Otago giant pumpkin competition has aroused not only her competitive instincts but her interest in growing things.

The 12-year-old first-time entrant grew a 12.9kg pumpkin at home on the family’s dairy farm at Paretai near Kaka Point.

Her stepfather brought home the seedling, dumped it outside the glasshouse, "and then we pretty much left it to grow itself".

As it began to grow "beautifully ugly", Brooklyn would go out and check on it.

"I think I always had it in mind to take it [to the show], no matter what."

Brooklyn said she liked to take part in shows. She and her family regularly show Swedish Vallhund dogs and hoped to eventually show their Jack Russell pup, Indi. They put in a lot time and effort to present their dogs, and she had learned that pumpkins were a bit the same. It was all about doing your best, she said.

"It was so neat, seeing all the pumpkins and all the different shapes and sizes, big and small."

Having now got a taste for competition, next year she would be much more strategic about her pumpkin growing.

"I’d feed it more, use more cow and horse manure."

The sporty Balclutha Primary School pupil would also like to try a trick her grandmother told her about, where growers fed the vine milk into a slit by capillary action. Milk has vitamins and minerals, and the all-important calcium, which makes the pumpkin grow well.

Pumpkin-growing was a rewarding activity that had inspired the family to clear more of the area in front of the glasshouse in preparation for growing more pumpkins next year.

Their pet sheep, calf and goat would be fed the prize-winning pumpkin as a special treat, but they’d save some seed for next year.